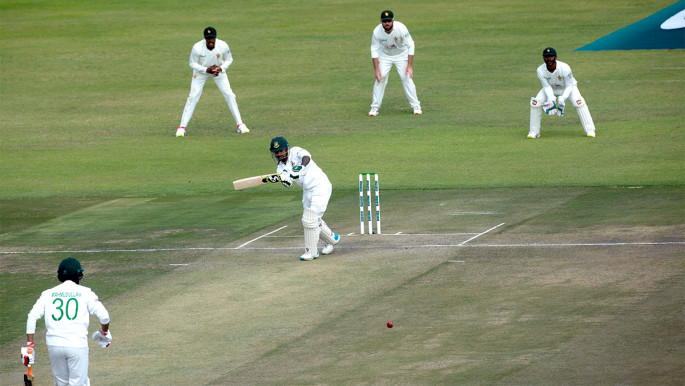 An exciting day of Test cricket has come to a close as in the evening session, Bangladesh did better in the lone Test of the series against hosts Zimbabwe at Harare Sports Club on Wednesday. With 54 runs, Mahmudullah is still unbeaten, while Taskin Ahmed has scored 13. Tigers have scored 294 losing 8 wickets at stumps.

Bangladesh captain Mominul Haque won the toss and chose to bat first in the one-off Test as that opener Saif Hasan was sent back to the pavilion early in the first over without scoring a run.

Blessing Muzarabani knocked his off stump back as he Saif was bowled for a duck. This is Saif's third duck in eight Test innings so far. Najmul Hossain Shanto then joined in the middle with Shadman and he too was gone for only 2. Muzarabani picked up both the wickets.

Skipper Mominul joined Shadman in the middle. Shadman Islam edged and was taken at first slip just as Bangladesh appeared to be recovering from their early turmoil. Before leaving, Shadman had 23 runs off 64 balls.

Mominul (70) got his 14th Test fifty, as the team passed the 100-run milestone after losing three early wickets in the opening session. The skipper hit 10 boundaries on his way to reaching 50.

In the second session of the day's play, Mushfiqur Rahim and Shakib Al Hasan both fell in consecutive overs, putting Bangladesh in serious difficulty.

Mushfiqur Rahim fell prey to Muzarabani, who was out for LBW. It was a considerable length outside off, Mushfiq didn't provide any shot, and the umpire had no difficulty in throwing him out.

Shakib then came in and was caught behind for 3 from 5 balls. Shakib was itching to play a scoring shot because the field was packed and wide. He went for the square drive, but that gave the keeper an edge.

Then Liton Das came to accompany the captain in the middle. Bangladesh were 117 for 5.

After Mominul’s departure, a record-breaking partnership of 138-run partnership between Mahmudullah and Liton helped Bangladesh fight back in the first Test. This was the highest 7th wicket partnership for Bangladesh against Zimbabwe.

Liton picked up his 9th Test fifty and got out for 95. It's the second time he has got out in the nervous nineties.

Donald Tiripano got his second wicket as Mehidy Hasan Miraz came on and got out lbw first ball. Tiripano was on a hat-trick but Taskin survived.

In Mahmudullah’s 50th Test match, he grabbed fifty in his return Test and becomes the third Bangladesh batter to score the half-ton.