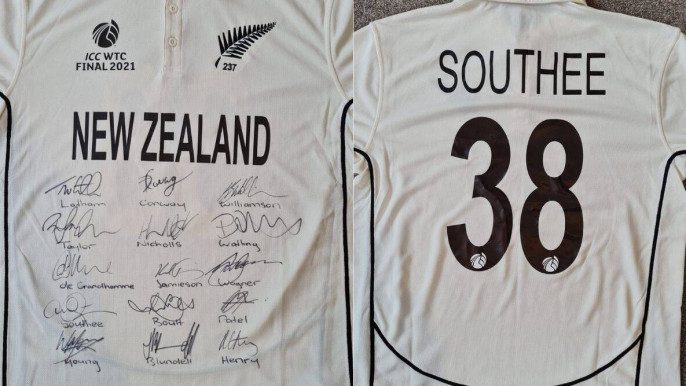 New Zealand fast bowler Tim Southee has opted to auction his World Test Championship shirt to raise money for Hollie Beattie, an eight-year-old child who has been diagnosed with a rare form of cancer.

Southee, who was New Zealand's top wicket-taker in India's second innings of the World Twenty20 final, announced on Instagram on Tuesday that earnings from the shirt auction would be donated to the Beattie family.

Hollie Beatie was diagnosed with a rare, aggressive form of cancer called neuroblastoma back in 2018.

"Hey guys, I am auctioning off one of my shirts from the @icc World Test Championship Final to support @hopeforhollie. All proceeds from the auction will go to the Beattie family," Southee wrote on his Instagram.

The shirt carries signatures of New Zealand's WTC -winning squad. Southee said he learnt about Hollie through the cricket community and wanted to help her in some way.

"My family first learnt about Hollie's story a couple of years ago through the cricket community and I have always been struck by the Beattie family's perseverance, strength and positive attitude.

"Since hearing that Hollie required more treatment I have been trying to find a way to support in some small way," he added.

"I am hopeful that this shirt can help contribute in some way to the Beattie family's ongoing medical needs as Hollie continues to fight. As a parent, my heart goes out to them as they battle on. Any bid big or small is greatly appreciated!" he added.