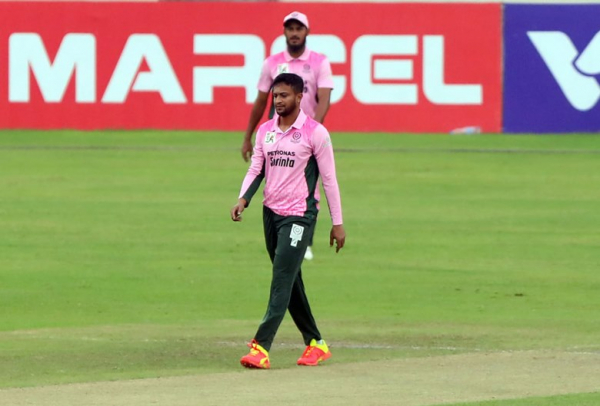 Mohammedan skipper Shakib Al Hasan wants to get on a plane for the United States of America (USA) to his family without playing Bangabandhu Dhaka Premier Division T20 Cricket League (DPL)’s Super League stage. The Ace all-rounder has already applied to Mohammedan for leave. Selim Shahed, secretary of the club's cricket committee, confirmed the matter to Cricfrenzy.

Shakib was banned for three matches for losing his temper and kicking the stumps and abusing the umpire last Friday during their high voltage match against Abahani Ltd. The Southpaw was also fined Tk 5 lakh by the Cricket Committee of Dhaka Metropolitan (CCDM).

Khelaghor could not play against Khelaghar, Brothers Union and Old DOHS. However, if all goes well, Shakib will return to the field against the Gazi Group cricketers today (Thursday) after overcoming the ban. And this may be Shakib's last match in the current season in Mohammedan's jersey.

“I can't say for sure whether it is his last match. However, we have already received a letter from Shakib. He has been in the bio bubble since March and has been away from his family for a long time,” Selim said.

"We have not yet made a decision on his letter. Because it is not my decision alone. Everyone will sit together and discuss this issue and then the final decision will be taken. For now, after today's match, everything will be finalized,” he added.

The Bangladesh team is scheduled to tour Zimbabwe on June 29. The schedule of the tour has not been finalized yet. However, the series is supposed to start with the test. The probable start time of that test is July 7. Shakib might join the national team directly in Zimbabwe from USA.