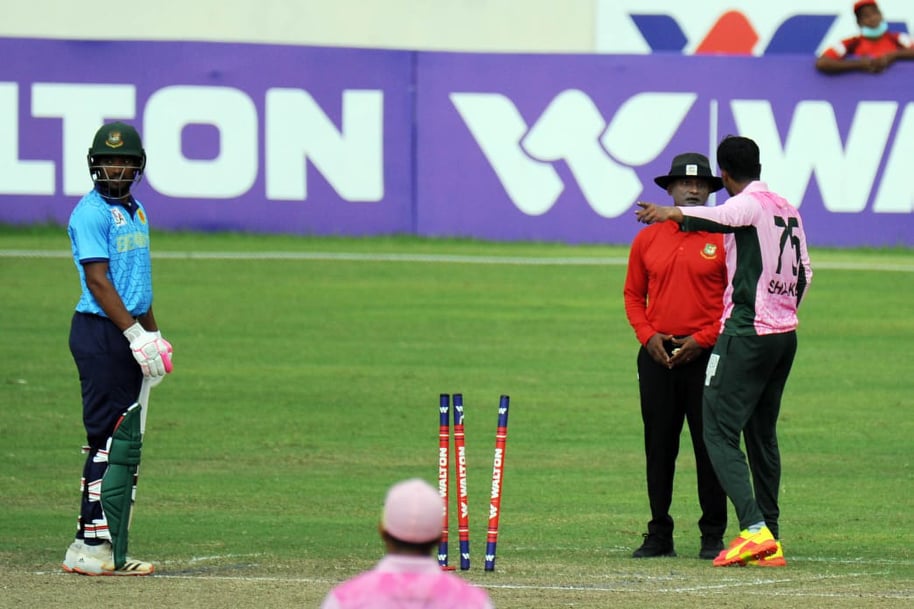 Chasing the target Abahani were in trouble since the beginning of the innings, as three-top order batsman Mohammad Naim (0), Afif Hossain (2) and Aks Swadhin (0) departed before crossing double-figure.

During the ongoing match, Shakib lost his cool and screamed at the on-field umpire as he appealed for a (LBW) against Mushfiqur Rahim in the fifth over, but the umpire Imran Parvez showed no interest. He kicked the stumps at the non-strikers' end, as well as shouted at the umpire.

At the sixth over, the rain became more intense, prompting the umpire to order the groundsmen to put in the covers. Abahani had batted 5.5 overs until that point.

The match was delayed due to rain and the target was reduced to 76 runs in nine overs, according to the D/L method. Abahani were restricted on 44 losing six wickets, Najmul Hossain Shanto scored 15 and Mushfiqur Rahim remained unbeaten on 18 runs.

The openers Abdul Mazid and Parvez Hossain Emon led to good start for the side, putting 37-run partnership. However, Majid could not last long as he was out for 16 runs off 18 balls. Mohammedan wicketkeeper-batsman Irfan Shukkur has failed in this match as well as in the previous two matches. He returned with just 14 runs.

Shakib who was struggling with the bat in the previous matches, has notched up an innings of 37 runs off 27 balls with one four and two sixes. The left-arm batsman was then caught by Arafat Sunny off Saifuddin.

Tags: Shakib Al Hasan,DPL
Up Next