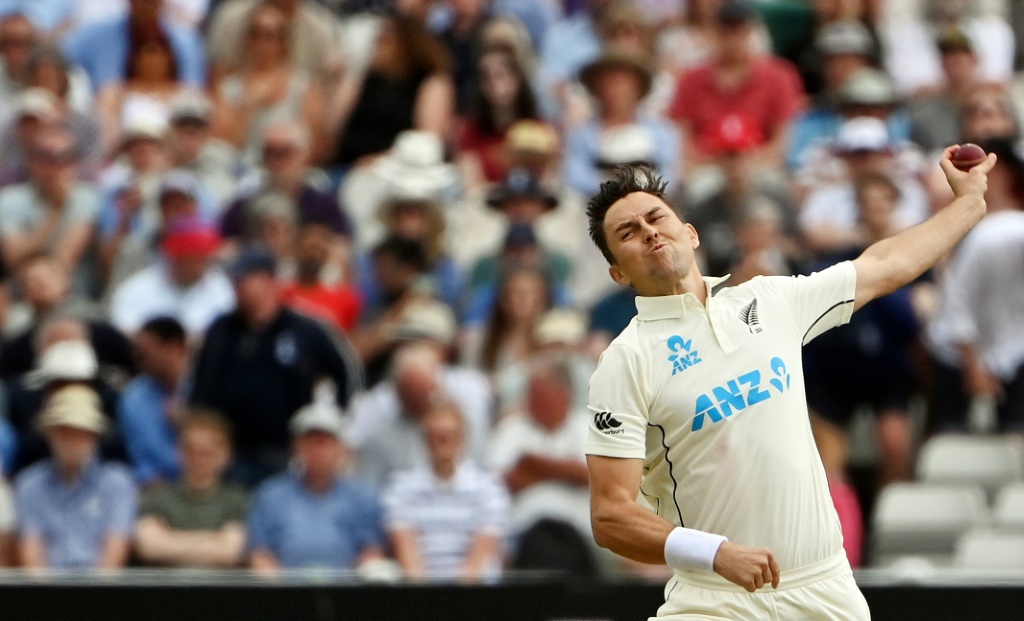 Trent Boult took two wickets in two balls on his return to New Zealand duty before England fought back to be 258-7 at stumps on the first day of the second and final Test at Edgbaston on Thursday.

The hosts were 85-3 and 175-6 but opener Rory Burns' 81 and Dan Lawrence's 67 not out ensured the Blackcaps did not dominate entirely.

England's last two wickets had so far added 83 runs, with Olly Stone (20) and tailender Mark Wood, 16 not out off 58 balls at the close, delighting a crowd of some 17,000 following the easing of Covid-19 restrictions.

Left-arm quick Boult, who had missed last week's drawn series opener at Lord's, following a spell of family leave, removed Burns and the luckless James Bracey, out for a first-ball nought to follow his duck on debut at Lord's, with successive deliveries in a return of 2-60 in 23 overs.

Matt Henry had done the early damage as England, who had been 72-0, lost three wickets for 13 runs shortly after lunch, with captain Joe Root out for just four.

The collapse started when Henry, in for the rested Tim Southee ahead of New Zealand's appearance in next week's World Test Championship final against India at Southampton, had Dom Sibley caught behind off an away-swinger for 35.

England's 72-1 became 73-2 as Zak Crawley's miserable form continued when he was caught in the slips for a duck off left-arm paceman Neil Wagner -- the only surviving member of New Zealand's attack from Lord's.

It was Crawley's ninth single-figure score in 11 Test innings since his stunning 267 against Pakistan last year.

Henry then captured the prize wicket of Root, caught behind off a late-moving outswinger.

Root had won the toss and batted despite overcast conditions that appeared to favour an England attack, once again without a specialist spinner as well as injured all-rounder Ben Stokes and the rested Jos Buttler, Jonny Bairstow and Chris Woakes.

Their places were taken by Will Young, Ajaz Patel and Tom Blundell respectively, with Tom Latham captaining the team.

Patel and wicket-keeper Blundell combined when Ollie Pope (19) was caught behind edging a cut off the left-arm spinner.

Boult then got in on the act when Burns, eyeing three figures again after his hundred at Lord's, drove at an away-swinger and was well caught by Latham in the slips.

Burns's exit came off the last ball of the 59th over and the first of the 61st saw Boult tempt Bracey into driving at another outswinger, with Daryl Mitchell -- the son of former All Blacks coach John Mitchell -- holding an excellent catch at third slip.

Stone replaced Ollie Robinson, who, following a successful on-field Test debut at Lord's, was suspended from international cricket after the emergence of historic racist and sexist Twitter posts.