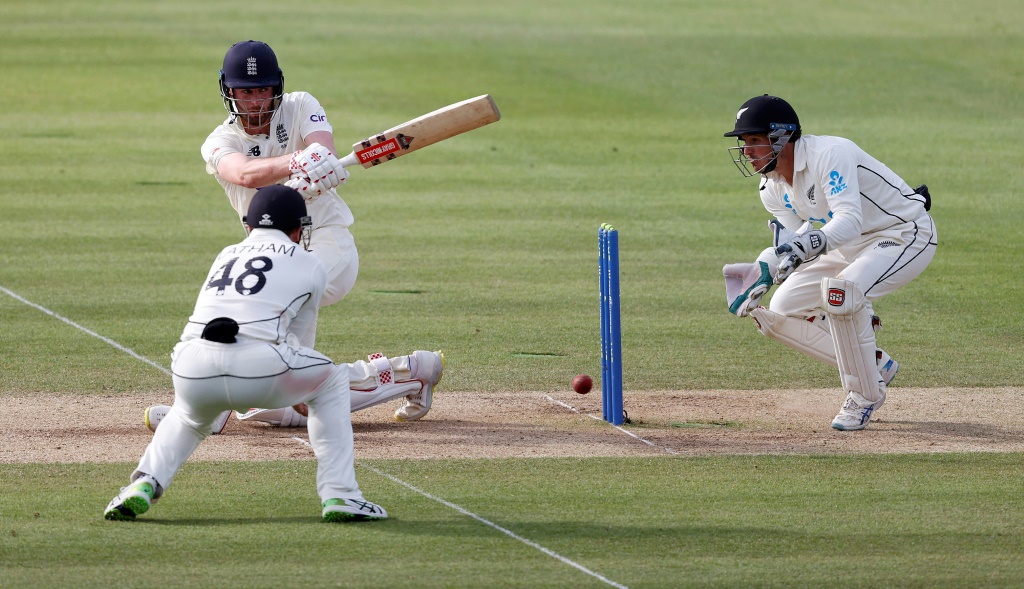 England had little to do with the challenge offered by New Zealand captain Kane Williamson's enterprising last-day declaration as the first Test at Lord's ended in a draw on Sunday.

Williamson set the hosts a target of 273 in 75 overs when he boldly closed his side's second innings on 169-6 after rain forced an early lunch on Sunday.

But the home side, in the face of some disciplined bowling and with an inexperienced middle-order, made a cautious start to their chase on a tricky pitch in a match where the whole of Friday's third day was washed out.

That left this two-match series all square heading into next week's second Test at Edgbaston.

It also meant England ended a run of three straight defeats following a 3-1 series loss in India this year.

This match was most notable for New Zealand opener Devon Conway marking his Test debut with a remarkable 200 in the tourists' first innings 378.

England opener Dom Sibley, out for a duck in the first innings, ground his way to 60 not out off 207 balls on Sunday with just three fours.

Joe Root, in at 56-2 in the 31st over, tried to up the tempo but by that stage a draw was looking the likeliest result in a match that marked the return of spectators to international cricket in England following last year's Covid-19 restrictions.

England captain Root, having hit five fours, the was lbw for 40 to left-arm paceman Neil Wagner, who finished with 2-27 in 16 overs.

Earlier, opener Rory Burns, who made 132 in England's modest first-innings 275, fell for 25 when he edged Wagner low to second slip.

Tim Southee, who took 6-43 in England's first innings, had Zak Crawley out for a second two of the match via a sliced drive to gully.

New Zealand, in their first match at Lord's since an agonising Super Over defeat by England in the 2019 World Cup final, were missing left-arm quick Trent Boult, who only arrived in the UK on Friday after a period of family leave.

England, however, were without four batsmen well-suited to a run chase in injured all-rounder Ben Stokes, with Jos Buttler, Jonny Bairstow and Chris Woakes all rested following quarantine after their stints in the Indian Premier League.

New Zealand, who face India in the inaugural World Test Championship final at Southampton later this month, resumed on Sunday on 62-2 before Ross Taylor made a brisk 33 featuring two sixes.

That followed his 4-75 in the first innings and the 42 he made when England batted first time around.

But Robinson's Test bow has been overshadowed by the republication of racist tweets he posted as a teenager, with the Sussex quick set to face disciplinary action.