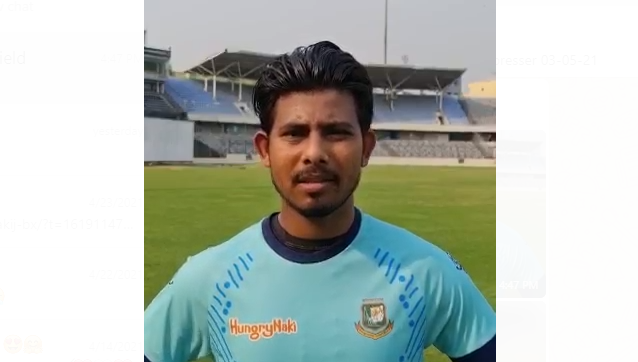 Mosaddek Hossain made his international debut with T20 in January 2016, he then played Tests and ODIs too but was out of the national team for some time in the middle. However, the all-rounder returned to the team with the series against New Zealand. However, he did not get a chance to play more than one match due to injury. Mosaddek now added to the preliminary squad against Sri Lanka for three-match ODI series.

Mosaddek has always been effective as a finisher with the bat. He also does spin bowling for the needs of the team. The right-handed batsman knows very well that in order to be a perfect finisher, he has to run from yorker and slower balls at the end. And that's why this all-rounder is working on them after return from injury.

"The role of the finisher is to take the team to a good position in bad times and to finish well when we are batting. And we also have the responsibility to finish at a good time. We know that yorkers and slowers come more at the end. I'm working on how to get runs out of slower and yorker balls. Other than that, I don't think there's anything new to do, so I'm working on improving this place” said Mosaddek after Monday’s practice session.

Mosaddek could not play more than one match due to injury in the squad against New Zealand. However, the all-rounder said that he felt more confident after practicing for 2-3 days after returning from injury.

“After recovering from the injury, I had the opportunity to practice for 2-3 days. Even after coming here, I practiced for two days. Feeling much better. The condition of the feet has improved a lot. I also did batting, bowling and gym, nothing seems to be a problem,”