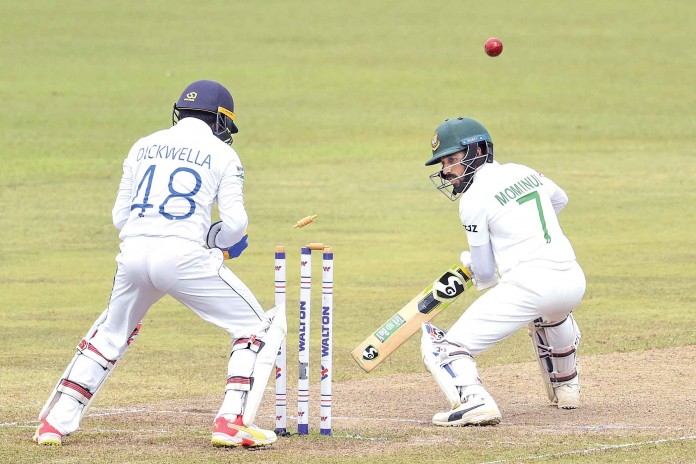 Praveen Jayawickrama’s 11 wickets helped Sri Lanka to beat Bangladesh by a huge 209-run margin in the second Test and clinched the two-match series 1-0 at Pallekelle International Cricket Stadium in Kandy.

Chasing a mammoth 437 runs to win, Bangladesh were dismissed for 227 in the first session of the fifth day during the Test.

Sri Lanka took just an hour on day five to wrap up the Test match as the spinners bagged all the wickets of second innings. Debutant Praveen Jayawickrama became the 16th bowler to take 10 on Test debut.

Bangladesh resumed the day on 177 for five wickets, they lost overnight batsman Liton Das early in the morning as Jayawickrama picked up the wicket through LBW.

Then, Mehedi Hasan Miraz tried to resist for a while with the tail-enders, however had to return scoring 39 runs. Apart from Miraz no other batsman could cross the double figure. They lost remaining wickets within 44 runs.

Jayawickrama took a fifer, his second of the Test. Another bowler Ramesh Mendis took four wickets for the side and de Silva got one.

Earlier, Sri Lanka declared the innings at 194/9 in their second innings setting the target of 347 runs for the visitors. The hosts decided to declare when Taijul Islam completed his eight five-wicket haul.

Bangladesh were all out for 251 runs in reply to Sri Lanka’s 493 in the first innings on day three. The visitors lost seven wickets for just 37 runs in their first innings as Sri Lanka spinner Praveen Jayawickrama took six wickets on debut. The 22-year old left-arm spinner broke the Sri Lankan record for the best figures on Test debut, taking 6 wickets for 92 runs.