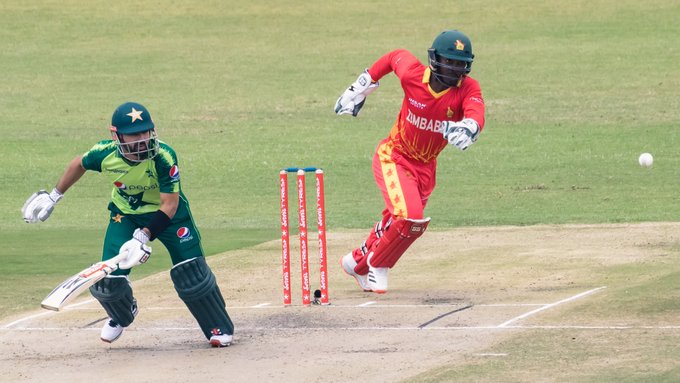 Mohammad Rizwan hit a fighting 82 while leg-spinner Usman Qadir grabbed three wickets as Pakistan edged out Zimbabwe by 11 runs in the first Twenty20 international in Harare on Wednesday.

Pakistan managed 149-7 in their 20 overs with their in-form wicketkeeper batsman Rizwan anchoring the innings after they were sent in to bat.

Zimbabwe needed 20 off the last over but fast bowler Haris Rauf kept tight length to concede just eight to pull off a hard earned win, helping Pakistan to 1-0 lead in the three-match series.

The second and third match will also be played in Harare on Friday and Sunday.

Luke Jongwe top-scored with a 23-ball 30 not out which included three boundaries and a six while opener Tinashe Kamunhukamwe scored 29.

Pakistan started the innings on the wrong foot when their world famous batsman Babar Azam fell in the second over, playing a casual shot into the hands of cover fielder for just two.

Zimbabwe could have had more wickets had they not dropped four catches, the most costly was of Rizwan when on just 13.

Rizwan, who cracked ten boundaries and a six off 61 balls, smashed 20 off the final Richard Ngarava over to take Pakistan to a fighting total.

Tags: Pakistan, Zimbabwe
Up Next