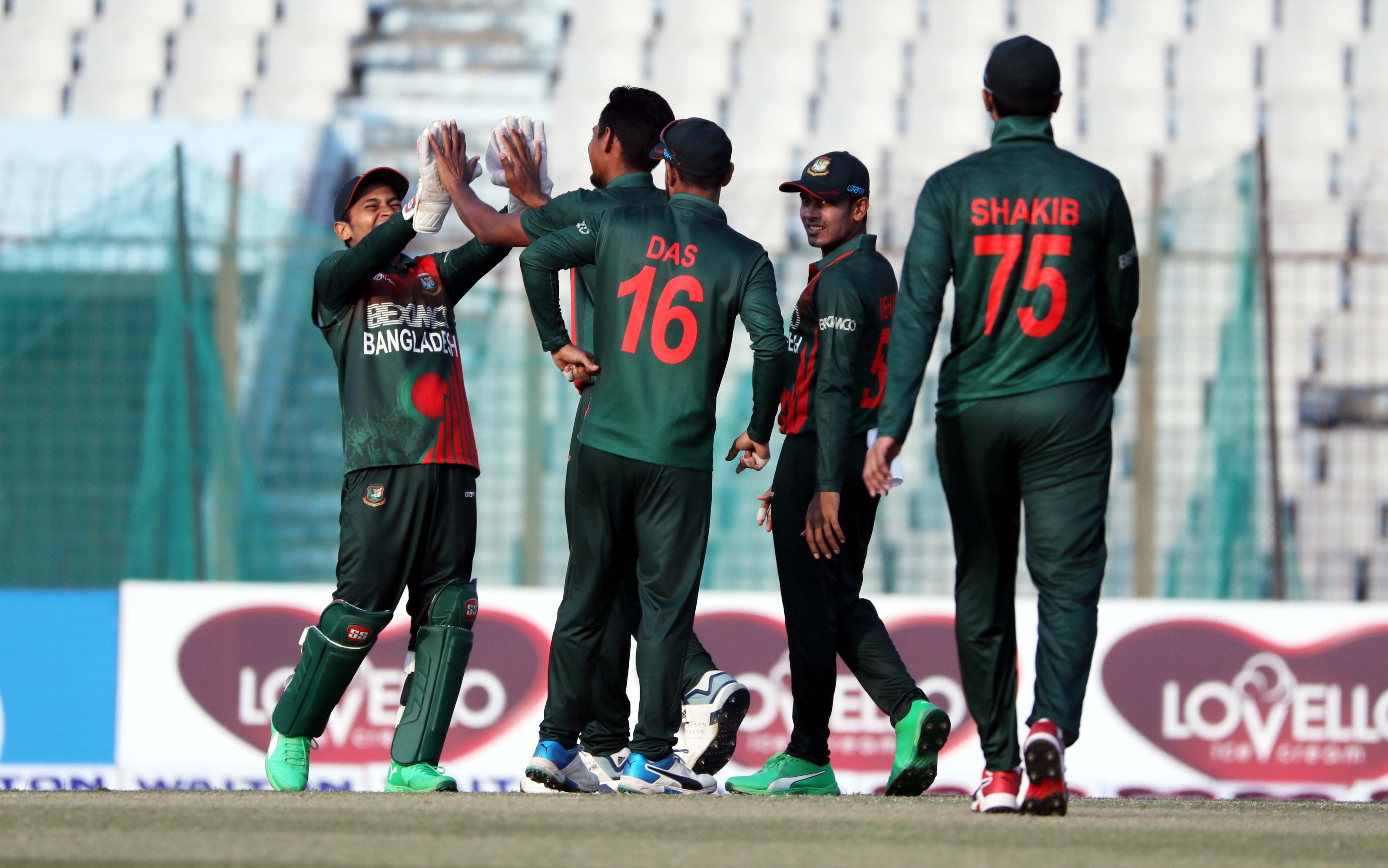 Bangladesh have clean-swept Windies for the third time as they beat visitor by 120 runs in the third ODI Monday at Zahur Ahmed Chowdhury Stadium in Chattogram. However, all-rounder Shakib Al Hasan left the field with possible groin cramp.

Tigers came back to International cricket after the corona pandemic and grabbed precious 30 points for the World Cup Super League. Bangladesh climbed on second of the points table.

The Caribbeans came down to play in response of 298 and Mustafizur Rahman hit immediately. They lost two top-order batsmen within 30 runs. Mustafiz enforced Kjorn Ottley for 1 run with a catch behind the wicket in a great outswinger. The left-arm pacer then dismissed another opener Sunil Ambris for 18.

Kyle Mayers (11) and Jahmar Hamilton (5) was picked by Mehidy Hasan Miraz. After that Caribbean captain Jason Mohammed was caught by Mushfiqur Rahim for 17 runs in Saifuddin’s bowl. Saifuddin picked up his second victim Nkrumah Bonner who scored 31. Jason and Bonner managed to build up a partnership of 32. WI suffered five wickets before scoring 100 runs. On the other hand, Shakib left the field during 29th over, as he suffered a groin cramp.

Shakib collapsed almost immediately in the follow through after delivering a ball in his 4.5 overs and he was bendy in a lot of pain. He got up for a moment but is sitting down on the ground again. He was holding on to his groin and the physio came to ground immediately. Shakib was back up on his feet for a while and physio was making him do some lunges and then asked him for a mini jog, and Shakib shacked his head as soon as he runs a few steps. He left the field with discomfort.

Soumya Sarkar breaks the longest partnership of 38 between Rovman Powell and Raymon Reifer by getting the wicket of highest scorer Powell (47). Alzarri Joseph was run out by Najmul Hossain Shanto and then Akeal Hosein was returned by Saifuddin caught behind by Mushfiqur. Taskin ahmed took the last wicket of Reifer (27). West Indies ininngs came to an end at 177 runs.

All four veterans have scored fifty and gave Tigers a strong total to defend. Host were unsteady at the beginning of the match as opener Liton Das was departed for naught. Meanwhile, newly promoted on the third position, Shanto has failed to impress again. He went for 20. Then Shakib and Tamim build a partnership of 93 runs. Tamim scored his 49th ODI fifty before he got out.

Wicket-keeper batsman Mushfiq came to the field to continue the run flow with Shakib. They got 48 runs partnership between them. Shakib got out for 51 runs when team was on 179. Mushfiq and Mahmudullah then took on the Windies bowlers as Mushfiq gone for 64, while Mahmudullah hit a speedy unbeaten 64 runs.Soumya left the crease with 7 runs as he got run out.Then Saifuddin and Mahmudullah ended the innings and set the target.