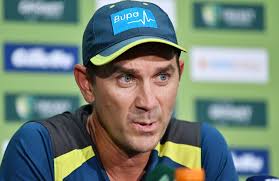 The third Test Match between India and Australia in Sydney has become a controversial one with accusations, from sledging to racism alongside injuries. Meanwhile, former Australia captain Steve Smith received a lot of criticism from everyone, including fans and experts like former captain Michael Vaughan for his action during the game. However, Australian Head Coach Justin Langer has backed Smith against Vaughan's claim.

When the video of Steve Smith doing shadow and scuffing the crease of Rishabh Pant in a drinks break became viral on the social media, the reactions came from everywhere. Former captain Vaughan tweeted this in response, "very, very poor from Steve Smith," and later he added it was "a silly thing for him to be doing."

However, Justin Langer did not agree with what Vaughan commented and said that he was "out of line" to make this type of criticism. While speaking to the local radio, SEN, he said, "I spoke to Michael Vaughan as well, I thought he was out of line actually."

He further added that he could have understood this if anyone else would have done that but didn't expect from Vaughan.

With the third test ended in a draw and the series is currently levelled at 1-1, it will be interesting to see how both teams play in the fourth match of the Test series which will be a decider one as well, starting from January 15, 2021, in Brisbane.