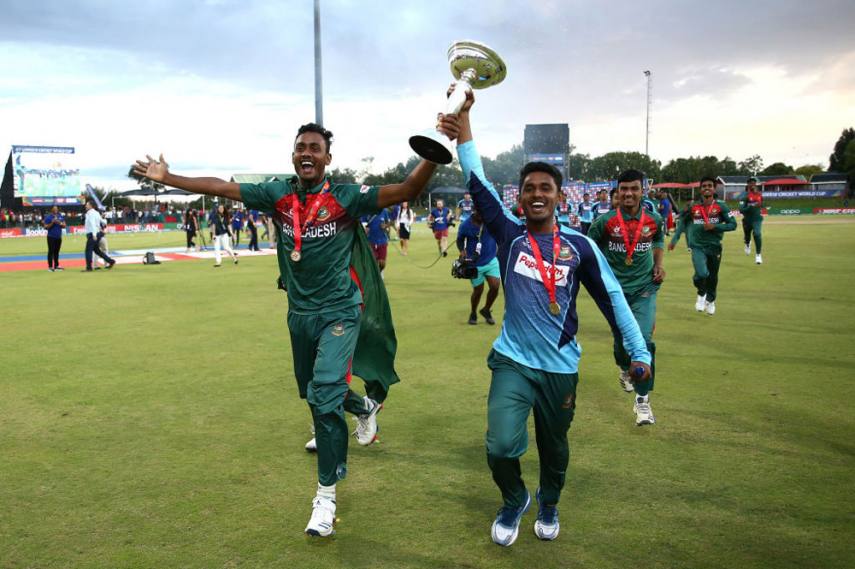 The year 2020 was supposed to be packed with international assignments for Bangladesh where they were scheduled to play at least 10 Tests and a large number of limited over matches.

However they eventually ended up featuring in only two Tests, three ODIs and four T20Is till March and had to sit idle for the remaining nine months, due to the COVID-19 pandemic which made the world of sports come to a standstill.Juniors conquer, Seniors wait

Bangladesh’s biggest success in cricket during 2020 came through Under-19 team as they conquered the summit for the very first time during ICC Under-19 World Cup in South Africa by defeating India by 3 wickets in the final in Potchefstroom on February 9.

Soon after Victors achieved the milestone, Bangladesh Cricket Board (BCB) announced a master-plan with the group of Victors but the COVID-19 disruption forced them to keep waiting for an opportunity to play cricket.

Ace Bangladesh all-rounder Shakib Al Hasan also made a comeback to competitive cricket this year after he underwent his one-year ban on October 30 which was imposed by International Cricket Council (ICC) for not reporting corrupt approaches by a bookie.

Tigers began the year disastrously as they suffered a 0-2 defeat against Pakistan during a two-match T20I series in Lahore in January and also conceded an innings defeat in Test against the same opponent during first Test in Rawalpindi next month.

Bangladesh completed two of their three-phase Pakistan tour but the final phase consisting of lone ODI and remaining Test got postponed due to the coronavirus outbreak in this region.

Earlier on February-March, Bangladesh restored some pride by defeating Zimbabwe by an innings and 106 runs at home which ended their six-match losing streak in the longer format.

Bangladesh then maintained 100 percent winning record by defeating Zimbabwe in all three ODIs and two T20Is at home.

Despite Liton, Tamim heroics, the ODI series became an emotional event after captain fantastic Mashrafe Mortaza announced that he would step down from captaincy after the series and will only available as a player.

Juniors conquer, Seniors waitBangladesh were scheduled to host Australia and New Zealand and tour Ireland and Sri Lanka alongside participating in Asia Cup Twenty20 in September and ICC Twenty20 World Cup in Australia in October-November but all got either cancelled or postponed due to the COVID-19 pandemic.

Bangladesh women’s team passed a quiet year as they failed to regroup following the humiliation at ICC Women's T20 World Cup in Australia earlier this year where they lost all their four group stage matches.

This was the only tournament they played in 2020 as big tournaments like Asia Cup, women's ODI World Cup qualifiers also got postponed.

BCB hoped to arrange a two-match series in March to celebrate the birth centenary of Father of the Nation Bangabandhu Sheikh MujiburRahman, featuring a lot of international stars but they also had to postpone the series between World XI and Asia XI due to the corona outbreak.

Bangladesh were looking forward to play in Sri Lanka but it eventually did not materialise as the tourists were not ready for a 14-day quarantine period.Juniors conquer, Seniors wait

In the domestic front, Dhaka Premier Division Cricket League League, country’s prestigious 50-over club tournament which is regarded as the major source of earning of maximum number of the cricketers was postponed after the opening round.

Cricketers suffered immensely considering clubs were not ready to pay without any confirmation of the tournament and the issue has been hanging as it is yet to be finalised by Cricket Committee of Dhaka Metropolis (CCDM).

BCB managed to resume cricket in the nation through BCB President’s Cup, a 50-over three-team tournament played by leading cricketers of the country.

After successfully hosting it with the bio-bubble in place, BCB came forward to arrange Bangabandhu T20 Cup, played by five corporate houses which also helped cricketers in more than one way as they not only returned to cricket ground but also had the opportunity to earn some money.

This tournament also marked the return of Shakib in competitive cricket though he failed to shine in the tournament managing only six wickets and 110 runs in nine matches.