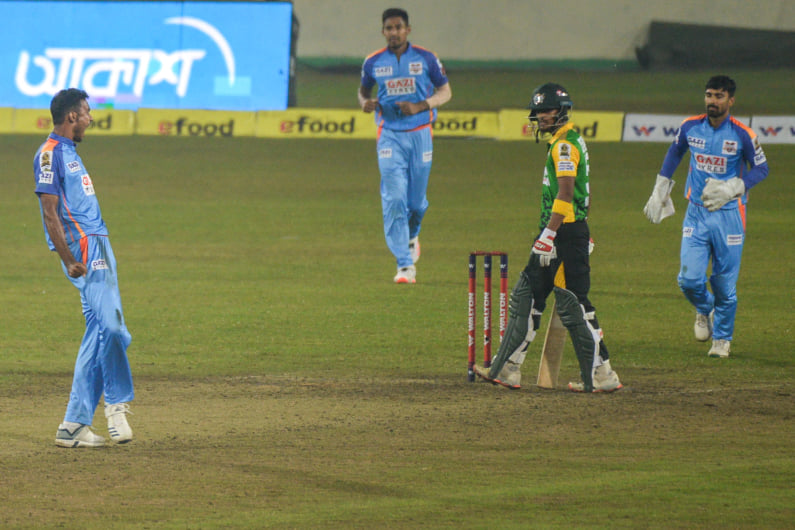 Gazi Group Chattogram ended their league phase campaign on a high as they earned 36-run win over Minister Group Rajshahi in their group stage match at the Sher-e-Bangla National Stadium on Friday.

Openers Liton Das and Soumya Sarkar powered Gazi Group Chattogram to a respectable total as shared 122 runs for the opening stand after Chattogram was sent to bat first.

Soumya Sarkar struck highest 63 off 48, his consecutive second fifty in the tournament, following his 37 ball-67 against Gemcon Khulna while Liton Das hit 55 off 43 and both of the openers took the Rajshahi bowlers in disdain to pave a way for a big total and scored runs at 9 per over, which indicated that they could end up putting a commendable total.

But it was Shamsur Rahman’s unbeaten 18-ball 30-run knock gave Chattogram the much needed finishing touch to end their innings on 175 for 4. Anisul Islam was the most successful bowler for Rajshahi with 2 wickets for 21.

After setting a target of 176, Chattogram won the match by 36 runs thanks to their disciplined bowling effort.

Despite losing the match, Rajshahi’s hope for qualifying for the playoffs are still alive. Najmul Hossain Shanto-led side’s fate will be decided on the result of clash between Fortune Barishal and Beximco Dhaka.

‘’ T20 cricket is a very short format, where the first 8 overs are very important. If a team can start well then they can use the last 5-6 overs quite well,’’ he said.

‘’Yes, sure. We will now play in the playoffs which is very important. Hope everybody stays fresh and gives their best,’’ he said.

In a must win game, Rajshahi batsmen struggled against the spirited Chattogram bowling attack as they kept taking wickets in regular intervals. Couple of batsmen got the start but failed to convert it into big scores as Rajshahi finally managed to post 139 for 8 in 20 overs. Nurul Hasan was the highest scorer with 28. Player of the match Nahidul Islam bagged 3 wickets for 17 for his match-turning spell.

Anisul Islam bowled very well in the middle overs. I think we lost our momentum in the 19th or 20th over. I think it would have been better for our team if we could have kept them at 180 runs. We haven't been able to learn from mistakes. It can happen in cricket,’’ said Rajshahi skipper Nazmul Hossain.

‘’I think it's very difficult. It is very difficult if we have to look at the other team to qualify. Our plan was that we would play better. Unfortunately this did not happen. Yet we have a chance to see what happens,’’ he said.