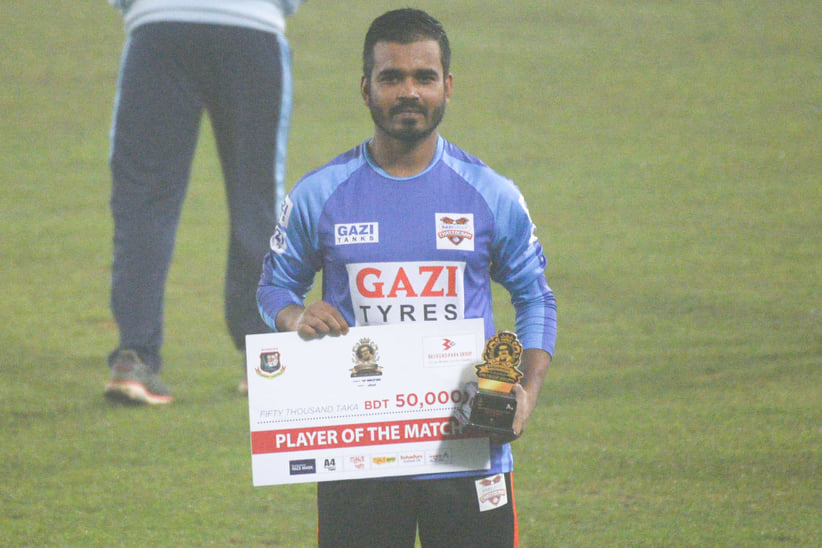 Gazi Group Chattogram batsman Shamsur Rahman hit a six in the last ball to help them win a thriller as they beat Gemcon Khulna by three wickets in Bangabandhu Cup T20 tournament at Sher-e-Bangla National Stadium on Tuesday.

Shamsur and Nahidul Islam were chasing 37 in the last three overs when Shamsur struck two boundaries in the last two balls of the 18th over to ease the equation for Chattogram.

Off-spinner Shuvagata Hom came to bowl in the 19th over and Khulna skipper Mahmudullah dropped a crucial catch of Nahidul Islam in the first ball. Two runs were also taken at that delivery and later Nahidul smashed two sixes against Shuvagata to swing the match towards Chattogram.

Shamsur was unbeaten on 45 from 30 deliveries with five fours and one six and was adjudged man of the match.

Earlier, Chittagong won the toss and elected to bowl first.

The focus was on veteran pacer Mashrafe bin Mortaza as the experienced campaigner was roped in by Khulna through lotteries two days ago. Mashrafe was picked in the Khulna playing eleven where he replaced Shahidul Islam.

The top three batsmen from Khulna got a start but Jahurul Islam Omi (26), Zakir Hasan(16) and Shakib al Hasan(15) all went back to the pavilion without scoring big.

Khulna sent Mashrafe to bat at number four but he was run out for just one.

Skipper Mahmudullah and Imrul Kayes chipped in with 20 odd runs in middle overs, 24 and 26 respectively, but Khulna were struggling to score quick runs in the late stage of the innings until Shuvagata Hom came to the crease.

In-form Shuvagata played a crucial 32-run innings from just 14 deliveries, in the end, to get the score past the 150-run mark for Khulna. Shuvagata’s cameo was composed of six boundaries and one six.