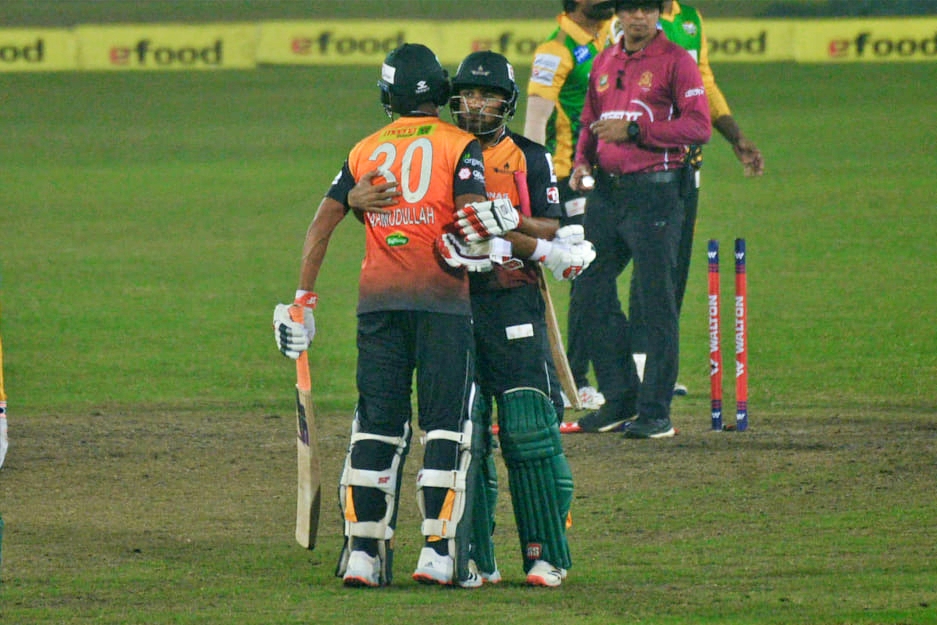 The win of Khulna that was earned with four balls to spare leveled them with Gazi Group Chattogram on top of the points table with eight points.

Khulna were off to a good start in their chase as openers Jahurul Islam and Zakir Hasan put on 56 in 8.2 overs before Zakir (19) got out in the ninth over.

Jahurul departed after making 43 off 40 balls and all of a sudden  Khulna lost a few wickets as the match went close in the late stages.

A total of 32 runs were needed in the last three overs when skipper Mahmudullah and all-rounder Ariful Haque were batting at the crease.

Mahmudullah played a crucial role with the bat as he was not out on 31 off just 19 balls with three fours and a six while Ariful was unbeaten on 10.

Earlier, Rajshahi skipper Nazmul Hossain Shanto struck half a dozen boundaries and a couple of sixes in his well constructed 38-ball 55.

Wicketkeeper-batsman Nurul Hasan then batted well and continued his good run of form as he played a late cameo in the latter stages of the innings.

Nurul was unbeaten on 37 off only 21 balls with three fours and two sixes while Jaker Ali was not out on a 19-ball 15, including one sixer and the pair added 52-runs in their unbroken stand.

All-rounder Saifuddin was included in the Rajshahi playing XI after regaining his fitness.

The Feni cricketer was Rajshahi’s first pick among the category A in the players’ draft before the tournament as the available Mahmudullah was overlooked.

Rajshahi eventually finished on 145/5 in their allotted 20 overs.