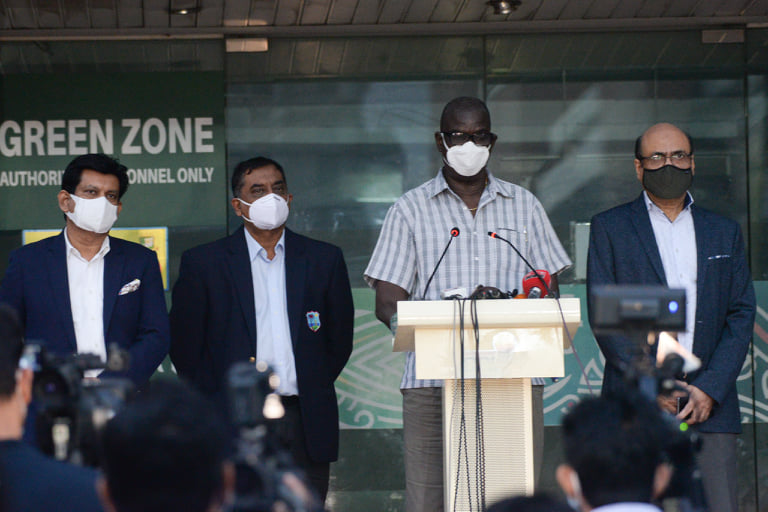 West Indies two-member inspection team expressed satisfaction on Wednesday over the Covid-19 management and security protocol that is in place ahead of their upcoming tour.

The duo arrived in Bangladesh on November 28 to assess Bangladesh Cricket Board's Covid-19 management and the security arrangements ahead of the forthcoming series.

West Indies are due to visit in January 2021 for a tour comprising three Tests, three ODIs and two T20Is during their stay, slated from January.

Dr. Akshai Mansingh (a member of the ICC & CWI Medical Panel as well a CWI Director) and Paul Slowe (Security and Safety Manager) visited BKSP, Ever Care Hospital, Zohur Ahmed Chowdhury Stadium in Chattogram and Sher-e-Bangla National Stadium during their stay while they are expected to leave on December 3.

‘’We came to Bangladesh to view the protocols regarding Covid-19, and its prevention, and the possibility of the West Indies touring early next year, in January. We had a lot of meetings before we actually came, and heard the protocol that was put forward by the BCB, which was very impressive,’’ Akash told reporters on Tuesday

“We are very happy with what we saw in Dhaka and Chattogram. The facilities are excellent. The Covid protocols are concise and tight. The national approach, both in the hotels and hospitals that we visited, comply with all international standards recommended for Covid-19. From a medical point of view, we are very happy and we now have to present our findings to the board of directors of CWI. I am very confident that we saw is probably as good an arrangement as you can have anywhere in the world.

The Bangladesh Cricket Board has presented a comprehensive Covid-19 management plan to its West Indian counterpart for approval ahead of the upcoming home series in January, taking first steps towards resumption of international cricket in the country.

Bangladesh had to cancel their tour of Pakistan in March and then their white-ball tour of Ireland in May as the pandemic situation worsened around the world. That was followed by the postponement of the Sri Lanka tour. Bangladesh's two-match Test series against Australia and New Zealand respectively were also postponed.

Bangladesh were also looking to reschedule the tour of Sri Lanka in October but that went in vain as the visitors were not ready to accept the 14-day quarantine proposed by the Lankans.

BCB reduced the normal 14-day quarantine and cut it down to seven days so that the tourists can start their preparation without much delay.

According to the plan, the tourists will need to give a corona test upon arrival and if they are found negative they will be allowed to start their training as soon as possible.

“Certainly for the first three days, we suggest in-room quarantine. After the third day, we do a second test. After that is negative, we would like to do some practicing within our squad, but not exposing ourselves to anybody else until seven days are passed. We will have inter-squad practice and activities. After Day 7, the recommendation is that we should have net sessions with Bangladeshi players,’’ he said,