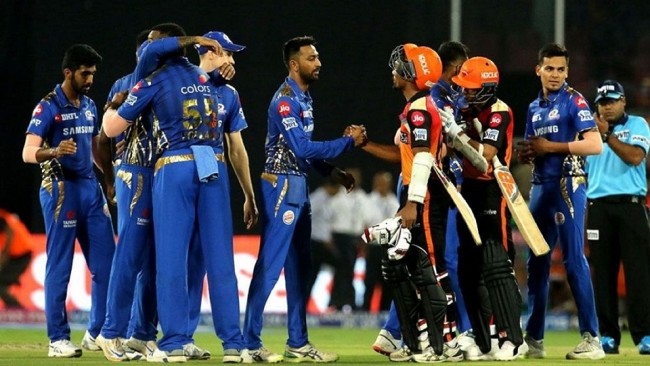 Sunrisers Hyderabad have won the toss and have opted to field. David Warner named Priyam Garg in place of Abhishek Sharma whereas a couple of changes were named by the Mumbai Indians captain, Rohit Sharma, who returned to the side after being fit. He announced Pattinson and Dhawal Kulkarni as the replacements of Jasprit Burmah and Trent Boult.

Hyderabad’s decision became fruitful as Mumbai opener Rohit Sharma could only manage 4 runs before Sandeep Sharma removed him in the 3rd over. His dismissal brought in-form Suryakumar Yadav in the middle.

Both Yadav and Quinton de Kock got the side off to a good start in a 27-run partnership. Sharma scalped the wicket of another opener while the Yadav too did not last long as he fell for a 29-ball 36. Meanwhile, Krunal Pandya and Sourabh Tiwary fell for a duck and 1 respectively and left Mumbai struggling at 82-5 in the 12.1 overs.

Amid this situation, Kieron Pollard came in the middle, steadied the ship with Ishan Kishan and added a 33-run partnership before Ishan’s stable 33 came to an end by Sandeep Sharma. However, Pollard stood out and contributed with a vital 41 off 25 deliveries. His knock involved 2 fours and 4 sixes as Mumbai Indians set a target of 149. For Hyderabad, Sharma claimed 3 wickets for 33 runs.

While chasing, Hyderabad openers David Warner and Wriddhiman Saha showed immense class and got off to a flying start. Saha started the onslaught by taking on Nathan Coulter-Nile for a six and a four in the second over whereas he smashed Kulkarni for consecutive fours in the next over.

Warner soon joined hands with three consecutive boundaries off James Pattinson and their quickfire batting lift Hyderabad to 56 runs inside the powerplay. While Mumbai Indians’ bowlers failed to restrict their opponent, Hyderabad openers’ onslaught remained the same and they posted 89 runs in the half-way mark.

Meanwhile, Warner smacked a maximum off Rahul Chahar and brought up his fifty in the 12th over, Saha too reached his half-century in the same over. Warner soon paced up the chase where Saha played the second fiddle. Warner remained unbeaten at 85 off 58 with 10 fours and a six whereas Saha scored an unbeaten 58 odd 45 with 7 fours and a six, as Sunrisers Hyderabad registered a convincing 10-wicket win to seal their place in the playoffs.