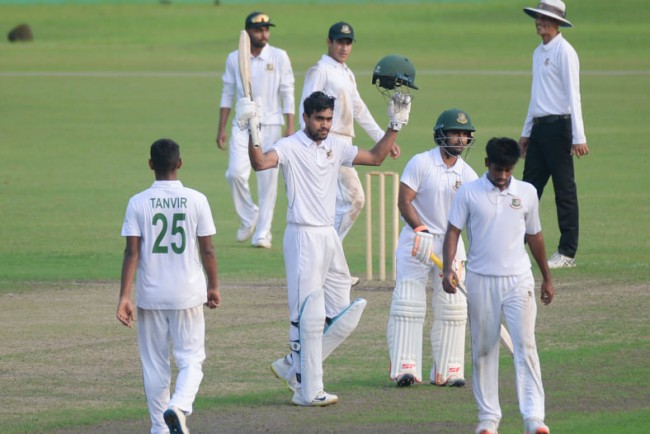 Under-19 World Cup-winning skipper Akbar Ali grabbed the spotlight by scoring a century on day one of the only intra HP-squad two-day match at the Sher-e-Bangla National Stadium in Mirpur on Monday.

Akbar, who was playing for Team 'A' batted for over three and half hours amassing a 161-ball 136 to help his side pile up a massive 406 for seven at the close.

Akbar, however, remained the only centurion of the day as Shahadat missed out on his ton for just six runs -- scoring a 162-ball 94 -- while Shamim was dismissed after a 46-ball 67.

Although the century came during an intra-squad practice game, it would surely boost up the confidence of the young wicketkeeper-batsman, who had been struggling for runs in the recently concluded BCB President's Cup. Akbar had managed scores of 1 and 2 in the two matches he played for Tamim XI in that 50-over tournament.

Akbar, who laced his innings with 20 boundaries and two maximums, featured in two 100-plus partnerships on the day.

The right-hander strung together a 137-run fourth-wicket stand with opener Shahadat Hossain and followed it up with another 120-run stand with Shamim Patwary for the fifth-wicket.

On a somewhat bleak day for the bowlers, left-arm pacer Shoriful Islam, Rejaur Raja and Shahin Alam scalped two wickets each for Team 'B'.