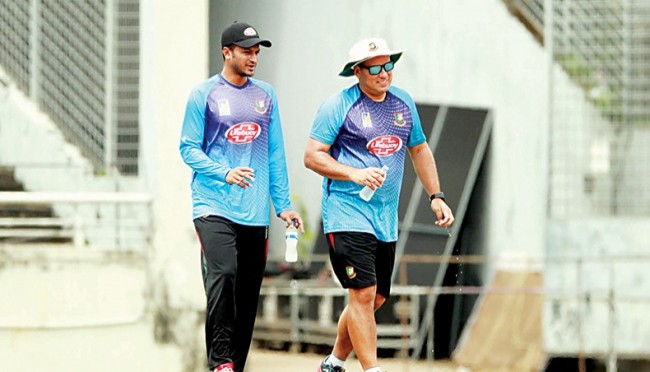 Bangladesh head coach Russell Domingo on Thursday urged to show patience with Shakib al Hasan as he is eyeing to make a comeback to competitive cricket following his one year ban by ICC.

Shakib, who is serving a one-year ban imposed by ICC for failing to report corrupt approaches, will be able to resume competitive cricket from October 29.

“I spoke to him yesterday. He is working hard on his fitness. He is out of the country at the moment. Shakib is like a lot of other players, they need to get used to playing some cricket. So if you are expecting him to come straight away, and perform massive miracles, you have to be patient with him. He hasn’t played cricket for a year now and he is keen to play,’’ Domingo told reporters on Thursday.

‘’He is the best all-rounder in the world. But he will also need to find his way. There’s a big difference between facing throw downs and bowling machine, and facing a 140kph bowler in pressure situations. He will also need some time to find his feet, and get his confidence back. We know he is a quality player, so I expect him to have a fantastic 2021 season for Bangladesh,’’ he said.