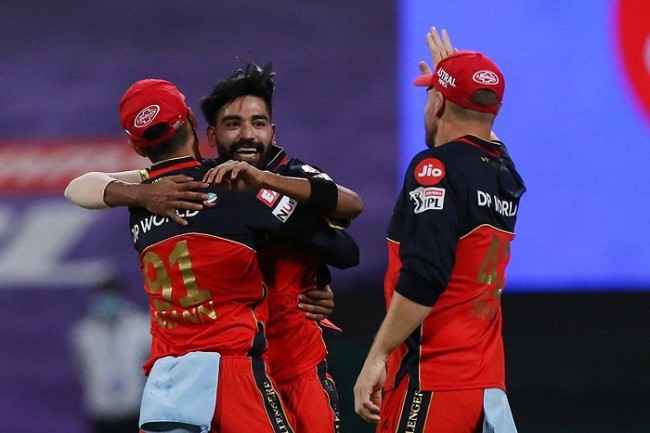 KKR captain Eoin Morgan elected to bat first after winning the toss. Tom Banton and Prasidh Krishna came in the playing eleven in place of Andre Russell and Shivam Mavi. On the other hand, Virat Kohli-led RCB made only one change. Mohammed Siraj came in place of Shahbaz Ahmed.

RCB ensured a tight powerplay with a fiery spell from their fast bowlers, especially Chris Morris. However, it was Mohammed Siraj who surprised everyone in the second over.

It was an outswinger that Rahul Tripathi hit towards third man and AB de Villiers did no mistake there and he was sent to the dugout for mere 1. The next ball witnessed the dismissal of Nitish Rana for a duck that too by an inswinger and it was a double-wicket maiden for him as well.

Their efforts were certainly rewarded as in-form Shubman Gill fell for 1 while trying for a pull shot. Tom Banton, although hit a boundary and a six off Navdeep Saini, his knock came to an end in the next over by none other than Siraj and KKR were reduced to 14 for 4 inside 4 overs and could only manage 16 runs inside the powerplay.

The onus fell upon Eoin Morgan and Dinesh Karthik to steady the ship. While Morgan tried his best to settle down, Yuzvendra Chahal trapped Karthik before the stumps for mere 4 and for KKR, it was 36/5 after 10 overs.

Morgan scored 30 off 34 with three boundaries and a six before Washington Sunder sent him in the dug-out. Later, Kuldeep Yadav scored a 19-ball 12 and Lockie Ferguson’s unbeaten 19 off 16 took KKR to 84/8 on the board. Notably, this was the lowest total in the league without being bowled out.

Siraj ended with a brilliant figure of 4-2-8-3, whereas Chahal claimed 2/15 in his 4 overs spell for RCB

While chasing, it looked to have been chase down within first 10 overs by the RCB batsmen as they have been in the formidable form be it – openers, captain or the most dependable AB de Villiers.

However, openers didn’t disappoint as Devdutt Padikkal and Aaron Finch got off to a flying start. While Finch played the second fiddle in the chase with a 21-ball 16, Padikkal’s quickfire knock of 25 came to an end by a direct throw from Pat Cummins due to a mix-up.

However, both the dismissal came a little too late as Gurkeerat Singh Maan scored an unbeaten 21 off 26 and captain Kohli’s unbeaten 18 off 17 sealed the deal for Royal Challengers Bangalore by 8 wickets that too inside 14 overs. For KKR, Ferguson claimed 1/17 in his 4 overs spell.