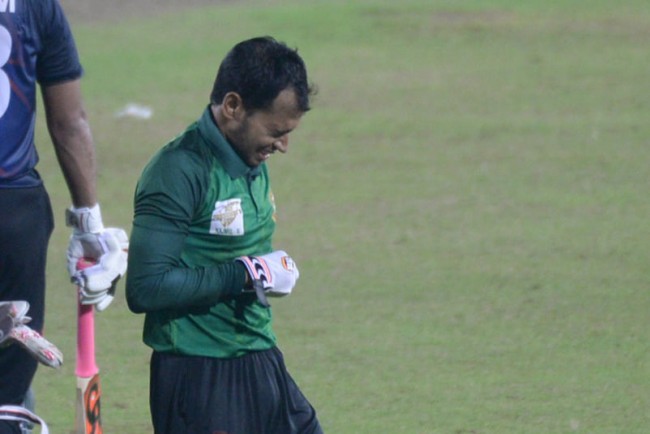 Bangladesh inform batsman Mushfiqur Rahim on Wednesday received huge blow as he sustained stress on his shoulder while playing in the ongoing BCB President’s Cup at Sher-e-Bangla National Stadium.

It can be termed as a huge blow for Nazmul XI if he is eventually ruled out from the competition considering his scintillating form with the willow that includes two fifties and a century in four matches.

‘’We are icing him at the moment and it look to be a stress injury. We will keep him under observation before for 24 hours before taking further course of action but it don’t look to be extremely serious,’’ Nazmul XI official confirmed Cricfrenzy on Wednesday.

Mushfiqur Rahim had to leave the ground after sustaining stress injury on his shoulder.

The incident took place in 25,4 overs when Mushfiqur tried to catch a ball on the second attempt after it deflected his gloves.

Yasir Ali tried to dispatch a slower ball of Al Amin Hossain ending up skying it the point region that was attempted by Mushfiqur only to sustain the injury on his right shoulder.