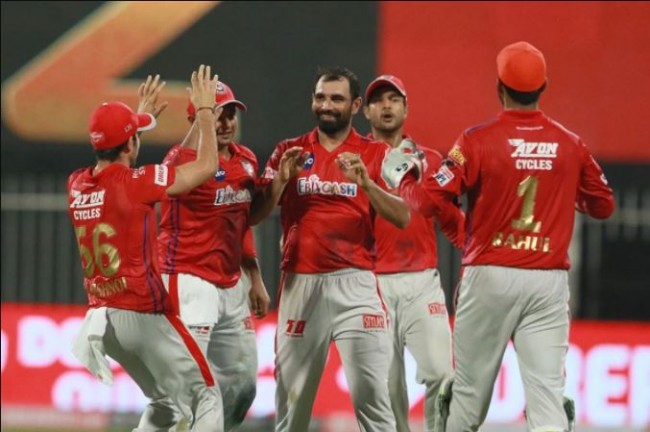 Mumbai Indians won the toss and elected to bat first where both the teams kept the same playing XI of their previous games. However, it was a bizarre start for Mumbai as in-form Rohit Sharma could only manage to score 9 runs off 8 balls with 2 boundaries as he was bowled by Arshdeep Singh in the 3rd over.

While Quinton de Kock was going strong from another end, he lost two more quick wickets as Mohammed Shami removed Suryakumar Yadav for a duck and soon Ishan Kishan too joined him. With three dismissals in quick successions, Mumbai Indians were reduced to 43 for 3 after 6 overs.

However, it was Krunal Pandya who steadied the ship along with de Kock. The duo added a 58-run partnership for the fifth wicket before Ravi Bishnoi dismissed Pandya for 34. Later, with a boundary and a six, de Kock brought his third fifty of the tournament and the total became 114 after 15 overs.

To win the game, they needed some more firework and to make things worse, Hardik Pandya was out for 8. His dismissal brought Kieron Pollard in the crease. Before he could build the partnership with de Kock, he holed out in the deep and Mayank Agarwal did the rest and sent him in for 53.

To score quick Pollard needed support from the other end which he got from Nathan Coulter-Nile. Both started taking on the bowlers and hitting all over the park. While Pollard smashed two consecutive sixes off Singh in the 18th over, Nathan hit two successive boundaries in the same over as well.

While chasing, Kings XI Punjab got off to a steady start with the openers – KL Rahul and Agarwal. Although Mayank started slow, Rahul paced up things with three fours and a six in the 3rd over. Mayank dismissed for mere 11 and Gayle tried to build the foundation with Rahul.

While Gayle could manage only 24 off 21, Nicholas Pooran supported Rahul with another 24 off 12 with 2 fours and as many sixes before getting out in the 13th over.

However, Rahul, at the other end brought his fifty with a maximum off Rahul Chahar. Meanwhile, the young spinner didn’t allow Glenn Maxwell to open his account and sent him in the dugout for a duck.

Later on, Deepak Hooda (23*) and Chris Jordan (13) tried their best to end the chase on the final ball before Jordan’s dismissal took the game to the super over.

Rahul and Pooran started and later Hooda batted in the super over and put up 5 runs off Jasprit Bumrah. While the scores looked easy to chase down as in-form Quinton de Kock and Rohit Sharma joined in the middle, Mohammed Shami made things more interesting.

With the run-out of de Kock in the final ball, the game reached to another super over where Pollard and Hardik Pandya batted for Mumbai and Jordan was handed over the responsibility.  Mumbai ended up scoring 11 runs.

To chase down, Chris Gayle and Mayank Agarwal came in the crease and Trent Boult came to defend the score. While Gayle started with a maximum, Mayank smashed two back-to-back boundaries and sealed the deal for Punjab.