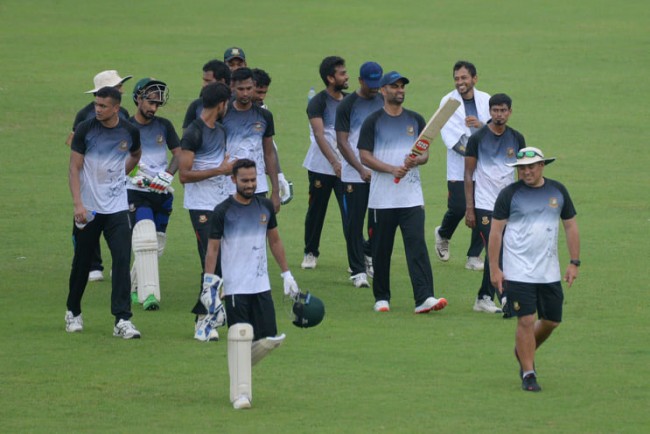 Opener Tamim Iqbal and Sadman Islam faced Taskin and Hasan Mahmud, who were bowling with new ball while in the other net middle-order batsman Mohammad Mithun and Yasir Ali batted against semi-new ball delivered by Al Amin Hossain, Rubel Hossain and Mustafizur Rahman.

The new ball is expected to be shared by Ebadat Hossain and Abu Jayed but the duo was unavailable as the former is in isolation while the latter was tested corona positive.

After the pacers completed nearly five overs apiece, spinners came into action with Mehedy Hasan and Taijul Islam bowled against middle order while Nayeem Hasan and Mahmudullah bowled against the openers.

The introduction of wicket-keeper and slips along with different all the noise made by fielders at different fielding position only showcased that it was not a typical net session while team management want to give them match scenario practice.

Nurul Hasan and Liton Kumar Das donned the keeping gloves and it won’t be surprising to see Nurul back in Test fold soon considering his inclusion was nothing less than a surprise.

Mushfiqur Rahim and Mahmudullah replaced the middle-order while Mominul Haque and Nazmul Hossain came in place of the openers after first-batch of batsmen completed their stipulated time in the middle.

Nazmul later said that he had some hard time during the covid 19 pandemic as everything was closed and now looking forward to cement his place with some big innings.

‘’I played some good innings but all I want is to play big inning and looking forward to do that. In the lock down all I wanted to do was to find out my fault and tried to work on it,’’ he said.

‘’If I get chance in future I will try to use this experience,’’ he said.