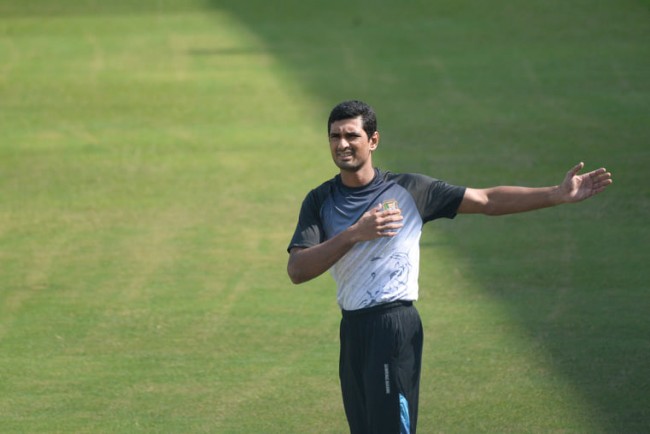 Bangladesh batsman Mahmudullah claimed that the intense fitness work during lockdown is paying off a lot as he is feeling comfortable with skill training.

Mahmudullah is one of the 27 cricketers who were called up for the skill camp for three-match Test series against Sri Lanka. He was however dropped in the one-off Test against Zimbabwe, which was Bangladesh’s last International fixture.

The call-up is a kind of chance to revive his Test career, which seemed to be over. His batting performance was a key reason behind his ax and Mahmudullah knows it well. He said that during the individual training session he spoke to the batting coach regularly through video chatting.

“During the lockdown one good thing that has happened was I got to work on my fitness,” he said after the first day of skill camp at Sher-e-Bangla National Cricket Stadium here.

“I had used the treadmill a lot. There was guidance from the physio and trainer and we were in communication on it every three or four days. So that has got a good result and now we are working on the skill, end of the day skill is important,” he added.

“We started individual sessions around four or five weeks ago so got a lot of time to work on personal things. I spoke to the batting coach [back then] and worked as per his guidelines. Now we are working as a team. The team is excited to be back as at the end of the day it is a team game and it is useful when you get to enjoy the work with the colleagues,” he remarked.

Mahmudullah pointed out that the group practice session, which has started now, is a chance of further honing the skill.

“We started practicing in Mirpur [as a team] after a long time. So it is nice to be back. The time during lockdown was tough because we were away from the team and the field. We had to keep busy with running and gym but not skill practice. Now we had individual skill sessions for a few weeks and now have started training as a team,” he concluded.