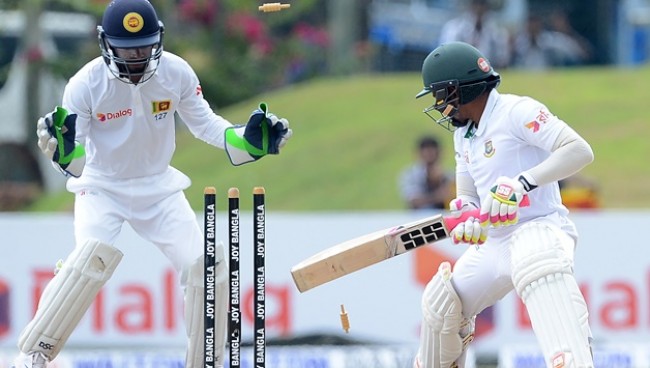 Sri Lanka Cricket is trying their best to see that that proposed three-match Test series against Bangladesh go as per schedule after it turned doubtful in the recent past.

SLC just entered the consultative process with the authorities in the Health Ministry. As a part of their consultative process, a high-level team of Sri Lanka Cricket (SLC), headed by SLC President Shammi Silva called on Lieutenant General Shavendra Silva, head of national operation centre for prevention of COVID-19 outbreak (NOCPCO), chief of defense staff and commander of the army at the army HQ on Tuesday afternoon.

The discussion explored possibilities to have both international events and prioritizing highest standards of health while showing to the international community that there country is near successful in controlling the COVID-19 epidemic.

The SLC also tabled a copy of the blueprint protocol that has now been laid in connection with the Bangladesh tour beginning September 27 to 13 October.

SLC President Shammi Silva, secretary Ashley De Silva, CEO Daminda Attanayake, Team doctor Chandima Mapatuna, head of international cricket Chinthaka Edirimanne, head of domestic cricket Major Tanesh B. Dias and head of HR and PA to President were associated with the discussion at the Commander’s Office as  Bangladesh tour to Sri Lanka for the Test series is still in doubt due to quarantine issues.

The authority of Sri Lanka said the further rounds of discussions with health authorities would expose the whole project to better exposure. While further round of talks will be required to get a clear picture, it was leant through sources that Test series likely to proceed as per plan after Sri Lanka Cricket is planning to change their stance regarding the mandatory 14-day quarantine period.

It is understood that SLC had prepared a new bio-safety plan where they mentioned that they are willing to allow the tourist take full preparation from seven days while the first week they will be isolated in the hotel unlike the initial plan where it was mentioned that cricketers will not be allowed to come out of the hotel room while the team meeting have to be completed through Zoom.

It was learnt, according to the new bio-safety plan cricketers will be allowed to practice even during the opening week of their arrival but have to make sure they maintain social distance.

SLC have also mentioned that the tourist will be hosted in Hambantota they are expected to be shifted to Kandy after the only practice game against Sri Lanka A team, scheduled from October 18-20.

The opening two Test will be played in Kandy while the last Test is expected to be played in Colombo. It was learnt that host have also decided to increase the members of the tourist but they are not willing to host the HP Unit with the national team.

Bangladesh were planning to include the HP squad as they were planning to play some matches with them but now will have to do it with the cricketers allotted for them by the host that is expected to be between 35 to 41 cricketers though initially they suggested that tourist cannot take more than 30 cricketers.

Bangladesh's tour of Sri Lanka, which was scheduled for July-August, was postponed because of the COVID-19 pandemic. Bangladesh, as per the current plans, are expected to travel to Sri Lanka on September 27 for the three-Test series that is scheduled to start from October 23.

BCB is planning a week-long residential camp ahead of the tour that will mark the resumption of competitive cricket for both the sides. The residential camp is set to begin on September 21. The BCB will conduct COVID-19 tests in four phases, with three tests scheduled on September 18, 21 and 24, and the final test 72 hours before they take the flight to Sri Lanka.