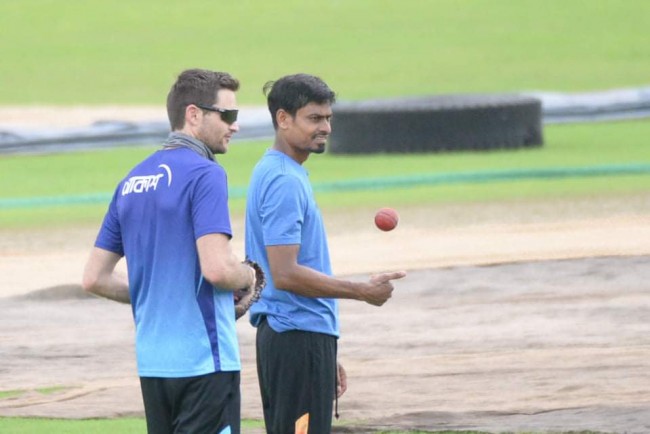 Bangladesh’s one of the specialist spinners Taijul Islam said on Tuesday he does not face any problem to bowl in long hours during his changed bowling action.

Consulting with Bangladesh spin bowling consultant Daniel Vettori, Taijul has brought a wholesale change in his bowling action in a bid to play in all three formats of games and diversify his bowling with variation as well.

The experienced spinner claimed that he made a good habituation with his new bowling action that suited his physique and comfortably bowl against the batsmen.

“I’ve talked with Vettori about my bowling action after which I’ve changed my bowling. In the meantime, I start bowling against batsmen. My bowling action has adjusted with my physique,” said Taijul Islam, who represented Bangladesh in 29 Tests alongside nine ODIs and two T20Is after being burst into international arc in 2014.

“Despite bowling for a longer period, I feel no problem. I had some personal bowling sessions. Each player did a one-two hour session. By doing those sessions, the players have been benefited for it for which they could do their work as per their own will,” Taitul told via BCB video message in front of the dressing room of the Sher-e-Bangla National Cricket Stadium (SBNCS) in Mirpur today.

Taijul is a regular spin force of the Bangladesh Test team but he is yet to cement his position in Tigers’ ODI squad six years after his international debut. Making a credible hat-trick in his Test debut, the spinner played only nine ODIs.

Last year he made his Twenty20 debut and played two matches so far. Taijul swapped his bowling action to be regular in limited-overs cricket. He believes that regular practice will make him confident.

“I’ve changed my bowling action considering different aspects of the bowling, bounce and different diversity. I meanwhile start getting its reward by bowling against the bowlers. The new action helps me from the aspect of diversity,” he said.

“You all know we can’t practice for the last three-four months. We have done what we could have at home whether it is gym and light practice session. Therefore, it became very tough to return to the field after a three-four months hiatus. We have been practicing for the last two months with the facilities provided by the Bangladesh Cricket Board (BCB). Bowlers have worked on bowling variation and batsmen have acted on batting skills and techniques.”

“It’s really tough for the players or athletes to remain out of sports for a longer period. We always like to play sports. We’ve the Sri Lanka series ahead. It’s very important for us. If it is held, we all could return to the field. It would be a better feeling if we could return to the previous situation,” he concluded.