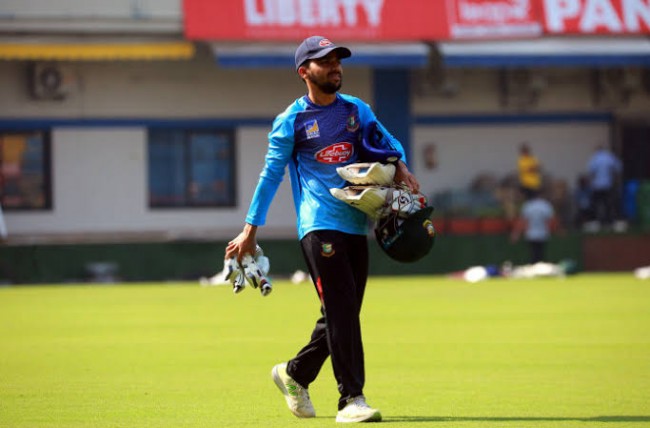 Bangladesh Test skipper Mominul Haque is relieved to have the service of ace all-rounder Shakib al Hasan at the middle of the Sri Lanka tour.

Shakib is eyeing to make a comeback as his ban is expected to be lifted in October 28 and resumed cricketing activities from September 5 at the BKSP institute under the watchful eyes of two of his childhood coaches Nazmul Abedin and Mohammad Salauddin.

BCB president Nazmul Hasan already has already hinted that Shakib could possibly play the second Test of the upcoming three-match series against Sri Lanka and chances are high that the all-rounder will be flown to the island nation just ahead of the opening Test in order to adapt to the conditions.

‘’It’s very relieving [to have him back],’’ Mominul was quoted in Cricbuzz on Friday.

‘’As a junior captain I am extremely lucky that I will be getting the service of Shakib bhai at the middle of the series,’’ he said who was given the Test captaincy by BCB after Shakib was banned by BCB.

‘’ It’s a big opportunity for us because along the way it will create chances of playing well in Test series and win it as well and so it’s a positive thing for any Test captain to have Shakib [back in the XI],’’ he said adding that he is pretty confident that the experienced campaigner will be fit to play before the second Test as he will be well prepared through his preparation camp in BKSP.

‘’I am seeing Shakib bhai from the childhood and I think he is mentally very strong and can cover it and being prepared before the second Test against Sri Lanka],’’ he said.

The Bangladesh's tour of Sri Lanka which was scheduled for July-August was postponed because of the COVID-19 situation. Bangladesh are expected to travel to Sri Lanka on September 27 for the three-Test series that is scheduled to start in Kandy from October 24.