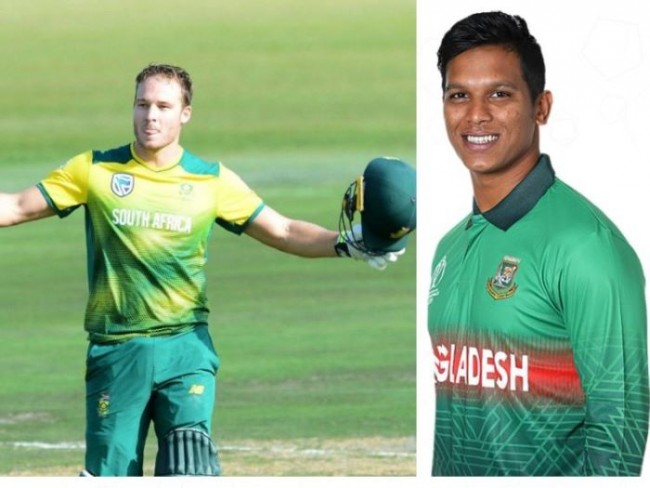 South African pinch-hitter David Miller said that the rampage he indicted on young Bangladeshi pacer Mohammad Saifuddin three years ago made the latter a stronger, sharper individual and bowler.

David Miller struck five sixes in a single over against Saifuddin that simplified his marauding century off just 35 balls against Bangladesh in 2017. The left-handed batsman was just one hit away from joining Herschelle Gibbs and Yuvraj Singh, the duo who hit six sixes in an over in international cricket.

Miller, however, broke the record for the fastest T20I century getting to the milestone in just 35 deliveries in that match. The right-arm pacer Saifuddin left the field with a horror and the avisitors lost the game by 83 runs to concede a series whitewash.

Saifuddin had conceded himself that his last over against Miller gave him experience how to bowl in pace and bouncy overseas wickets.

“No bowler wants to be hit for 31 runs in an over and it’s never nice for them. But you know in the competitive side as a batter you take a strike you want to take the bowler as each ball comes. Looking back to the over you know 31 runs, definitely he [Saifuddin] will be matured through that over, through that moment,” said David Miller, who has appeared in 132 ODIs and 78 T20Is.

“If you reflect on your past closely that will help your career move forward. So, it is a big learning curve for the youngsters and anyone really and that’s what experience is all about. The more you play the more you sort of go through the hardships and hard times you know you gain and learn so much,” Miller told Dhaka Tribune.

Like most of the cricketers in the globe, Miller is keeping himself at home and wait for the rage of the virus to come down.

Middle-order batsman said he is putting a thought on what he needs and has achieved in his career besides ensuring to make the best of the time spent with the family.

The south-paw was propelled into a position of leadership in the past summer as a number of seniors in the Proteas setup called retirements while a few remained unavailable.

The explosive batsman had spent most of his international career at the back of the seniors in the dressing room with Hashim Amla, JP Duminy, AB de Villiers and Faf du Plessis playing as the leaders.

“For me it’s been nice to be at home [in this lockdown] and take care of something that I haven’t been able to for many years. It has then been a great time to get fit and work on certain parts of my body that I haven’t been able to do for the busy schedule that we got in the normal circumstances,” explained Miller. “It really is a great time sort of reflecting on my career where I have come, what I have done and what I want to achieve that is still coming. So, it has been a positive time although it has been a tough time at the same time. Hopefully things will settle down and we will get back to the rhythm,” he added.