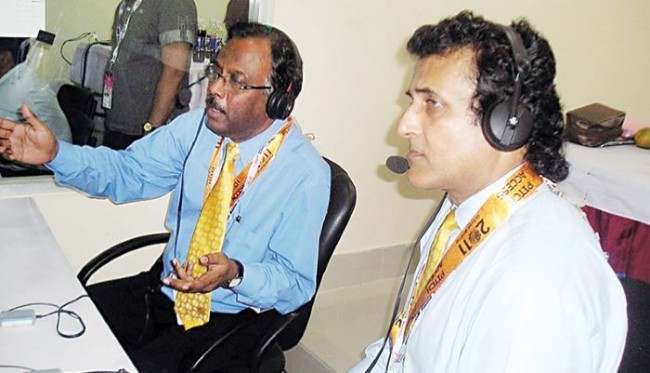 Local sports commentators are going through a tough time financially and spending days with fear thinking about the coming days as the cricket resumption is still far away.

Owing to the lengthy shutdown, not only the cricketers and support staff but also the Bangladeshi commentators are facing financial distress.

Seeing the current situation, it’s quite clear that cricket is not going to restart very soon and if the lethal COVID-19 virus continues, the agony will then increase further.

Bangladesh hasn’t developed commentating on sports into a reliable profession yet, but still there are a number of people who are engaged with this profession and working for different TV networks, Bangladesh Betar and in some private FM stations.

Athar Ali Khan, the most commonly heard voice for Bangladesh- who does commentary whenever Tigers’ have matches whether it’s international tours or in any ICC events. He had to move with the team for his job. And now, he, like the players is also staying at home and hoping to get over this pandemic and get to start to raise his voice and let people know what he sees.

The former national team opener has said that he isn’t struggling that much with money but still he said that every penny had its worth.

“When you are professionally doing something, you aren’t doing it for free. So, yes I am suffering some setbacks as there is no incoming, only outgoing,” Athar Ali Khan told an English daily on Sunday.

“I had an agreement that I will be commentating in the ODI and the Test match in Pakistan; then in the Ireland series,” Khan told the media.

“Normally what happens, after a series is scheduled then broadcasters align production team, commentators everything. So for the Australia and New Zealand series, I don’t know if I would have been taken aboard or not. But now there is no point in talking as the series is postponed,” he added.

Cricket commentator Shamim Ashraf Chowdhury, Athar’s fellow companion- who is not only a regular commentator in home series but also works as an expert analyst, expressed that his monthly income got a big blow because of the pandemic.

“I am financially very much affected as the series are getting postponed one after one. I used to receive a substantial amount from media engagements which has stopped coming. Everyone has devised their own lifestyle according to the income, so for me my income has fallen drastically, Shamim Ashraf Chowdhury said.

Due to the absence of all sporting activities, Kumar Kallyan, popular radio and on-field commentator is having a hard time financially.

“After the government declared a general holiday, I came to my hometown as there was no sporting activity. Luckily, the house-owner was a nice person and he has exempted the rent, so I don’t have to think about that,” Kumar Kallyan said.

“I have a school-going daughter, her school’s authority has not asked for fees yet. Don’t know what is waiting for me in the coming days,” he added.

Another radio commentator Jamilur Rahman said that he is now relying on the income from his job at a private firm to survive as he has lost out on many engagements due to stoppage of games.

“In Mujib year, there were various sports events planned and I had verbal assurance that I’ll do commentary in many of them. But as all the sporting activities stopped, I also suffered some financial loss,” Jamilur Rahman said.