Shakib discovers his life in a bubble 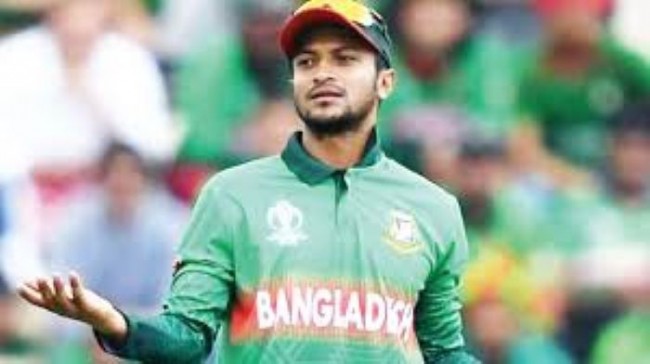 Bangladesh premier all-rounder Shakib Al Hasan felt that he was living in a bubble which he was just enjoying and took things slightly.

Shakib made the revelation in an interview session with Harsha Bhogle at Cricbuzz. He, of course, gave an explanation, stating he didn’t take things that much seriously and that brought the nightmare upon him.

The iconic all-rounder was banned for two years with one-suspended year for failing to report corrupt approaches by an alleged Indian bookie named Deepak Aggarwal on several occasions in between 2017-2018.

“I took it too casually. When I met the anti-corruption guy and told them and they knew in and out exactly what happened. To be honest, that’s the only reason I have been banned for a year, otherwise, I'd have been banned for like five-ten years,” Shakib Al Hasan said.

“But I think that was a silly mistake I made. Because with my experience and the amount of international matches I’ve played the amount of ICC’s anti-corruption code of conduct classes I took, I shouldn’t make that decision (to not report), to be honest,” he added.

The left-handed genius gave an example of not knowing the bookie’s cell phone number and didn’t even recognize him and that is why he didn’t take it seriously and that is where his light approach brought a disaster upon his career and gave him a lifelong lesson.

“I regret that. And I think no one should take those messages or calls (from bookies) lightly or just leave it away. You know we tend to get thousands of calls and messages and how many we remember. I can give you an example, the last time that guy messaged me, I replied to him, sorry who is this I’m talking to, so I didn’t even know who this guy I’m talking to and I talked to him two years back, three years back.  I never knew who that guy was at that time and I didn’t have his number at that time,” Shakib added.

“So, when they did their investigation they knew these were the thing and then they understood the situation. But to be honest no one should take those things lightly and casually and just say okay, leave it like that. Must inform the ICC Anti-Corruption guy to be on the safe side and that's the lesson I learned and I think I learned a big lesson,” he further added.

The mercurial all-rounder spoke about his mentality about why he didn’t take those things seriously.

For him, he said he was living his life in a bubble where he made a decision without thinking about the consequences that much and always thought that he never made anything wrong, which was wrongdoing for him and now he had a change of perception.

“Sometimes I live in a bubble, to be honest, most of the time but I’m surrounded by some of the very good people I know, so that helped me a lot. But still, you know when things are going your way you tend to live in those bubbles and you tend to forget what might happen. If I’m not taking those things seriously and you realize that later when you do those mistakes and then you realize, oh, okay, I should have done that. I was living in a dream or living in all those bubbles and I was just enjoying and I didn’t take things seriously and I took things lightly,” the south-paw all-rounder said.

“Because you do most things right in your life, you tend to get the arrogance into you sometimes to take some decisions. Okay, this is what will happen, nothing will happen, what’s going to happen, I’m not doing anything wrong. But you’re doing things wrong by the books, maybe not with your ethical things or something like that. But if you have rules and regulations by that you’re making some mistakes."

“But sometimes you tend to forget that. That’s what happened to me and as I said I took things lightly or casually and I didn’t pay any attention and I never thought of, of course, that never came to my mind that I’ll do something wrong, it’s just okay what’s going to happen, leave it and I live my life. But that’s the mistake I made. And that happens to not only players but also with other people live,” he added.

The all-rounder, who had a dream of World Cup tournament in 2019, made too many histories and got into troubles after a few months realized that he has to back his fans who supported him throughout this bad times and want him to make a comeback strongly.

“This time and this situation taught me things completely differently now. Previously maybe I was playing for the country, for myself, for my family, but now what I only think is what I can do to give them back, the people who have been supporting me for the last 12-15 years and they’re disappointed the action I made and how can I repay them and back them with some more. So, that’s the only mentality now I’ve,” the 33-year-old veteran concluded.