could have been banned for five or 10 years: Shakib 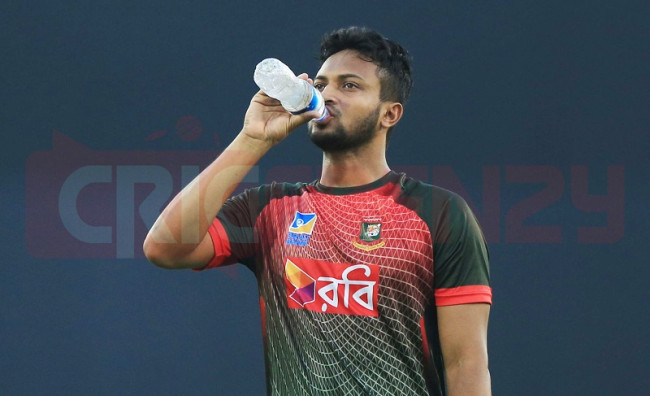 Bangladesh banned all-rounder Shakib al Hasan has revealed that his casual approach towards addressing a bookie’s approach led to his suspension by the International Cricket Council (ICC) in October last year.

After a thorough investigation, the world cricket apex body banned Shakib Al Hasan for two years with one year-suspended ban for failing to report corrupt approaches made to him on multiple occasions since late 2017.

The Anti-Corruption Unit (ACU) conducted a couple of extensive interviews with the Bangladesh all-rounder - first on January 23, 2019 and then on August 27, 2019 in relation to an ongoing investigation into potential corrupt conduct under the ICC code of conduct and in suspicion of involvement of an individual named Deepak Aggarwal.

The extensive investigation from the ICC had found that the Bangladesh premier all-rounder was guilty of failing to report the several approaches made by bookie Deepak Aggarwal, notably on two occasions seeking team’s information during the 2018 tri-series in Bangladesh in January and the IPL three months later.

During the Bangladesh Premier League (BPL) in November 2017, Shakib was aware that his telephone number had been provided to Aggarwal by another person who was known to Shakib. Aggarwal had asked this other person to provide him with the contacts of players playing in the BPL.

In mid-November 2017, Shakib exchanged various WhatsApp messages with Aggarwal at the instigation of him (A) while Aggarwal was seeking to meet him (S).

Shakib participated in an ODI tri-series involving Bangladesh, Sri Lanka and Zimbabwe in January 2018, the series where he and Aggarwal engaged in further WhatsApp conversations. On January 19, 2018, he received a WhatsApp message from Aggarwal congratulating him for being named man of the match in that day’s game. Aggarwal followed this message with one saying, “Do we work on this or I wait till the IPL.”

The mention of ‘work’ in the message was a reference to Shakib providing inside information to Aggarwal. But Shakib did not report this contact from Aggarwal to the ACU or any other anti-corruption authority.

On January 23, 2018, Shakib received another WhatsApp message from Aggarwal in which the latter made another approach to him to provide inside information, saying ‘Bro anything in this series?’ Shakib confirmed that this message was related to Aggarwal requesting inside information in relation to the ongoing Tri-Series, which he did not report to the ACU or any other anti-corruption authority.

On April 26, 2018, Shakib played in the IPL game between Sunrisers Hyderabad and Kings XI Punjab. He received a WhatsApp message from Aggarwal that day asking him whether a particular player was going to be playing in the game that day, i.e. again asking for inside information.

While the investigation revealed that Shakib had WhatsApp conversations with the said bookie, including asking him to ‘meet first’, he had only grown suspicious of the latter’s intentions much later.

Shakib therefore decided not to act on it, but also did not deem it necessary to report the matter which subsequently landed him in trouble.

“I took the approaches too casually,” Shakib was quoted in Cricbuzz during a conversation with Harsha Bhogle on Wednesday.

“But I think that was a silly mistake I made. Because with my experience and the number of international matches I’ve played and the amount of ICC's anti-corruption code of conduct classes I took, I shouldn’t have made that decision [to not report], to be honest. I regret that. And I think no one should take such messages or calls (from bookie) lightly or leave it away... We must inform the ICC ACSU guy to be on the safe side and that’s the lesson I learnt, and I think I learnt a big lesson,” he said.

“Because you do most things right in your life, you tend to get arrogant with some decisions. You may not realize but you’re doing wrong by the books. It never came to my mind that I’m doing something wrong [by not reporting the bookie approach immediately], it was just a feeling of ‘okay, what’s going to happen, leave it’ and I continued with my life. But that’s the mistake I made. And that happens,” the 33-year-old said.

Shakib, however, has vowed to emerge stronger from this episode and when he does, to repay the immense faith his supporters have shown in him all these years.

“This time and this situation taught me things completely differently. Previously I was playing for the country, for myself, for my family. But, now what I only think is what I can do to give back to the people who have been supporting me for 12-15 years and are now disappointed with what I did, and how can I repay them. Now that’s the only mentality I have,” he said, who can resume all types of cricket from October 29 later this year.