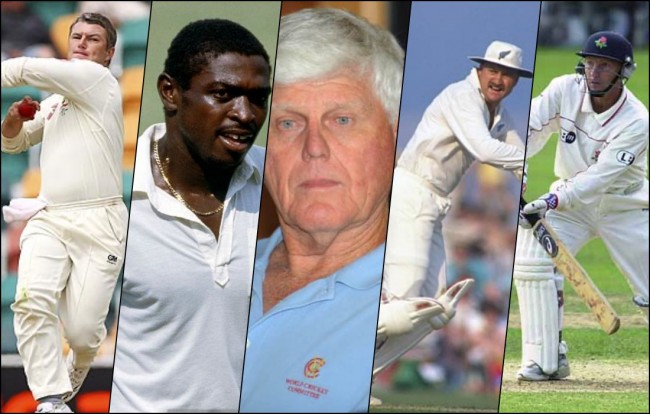 As sports aficionados often love and experts eschew from more often than not, comparing cricketers from different eras has always been a popular debate. “What if” this particular bowler or batsman played now or then, what would have happened and how it would have changed the proceedings, has been the main course of many debates for many years now. However, we are not going to walk that path. What we are looking for is five names that definitely were pitted against their time and consequences. Some of them could not cut the main eleven. Some of them were at the wrong end of a ban and some of them evolved even before the game did. So, here is five cricketers we think were born at the wrong time.

First on the list is someone who is considered to be one of the most unfortunate cricketers of all time. Australia’s leg-spinner Stuart MacGill played at a time when the greatest ever leg-spinner Shane Warne was at his pomp. Two years younger than Warnie, Macgill debuted six years later than him in 1998 and played second fiddle to Warne for most of his career. MacGill played 10 years for Australia and played only 44 Test matches and 3 ODIs. Among the 44, he could only manage seven Test matches in South Asian conditions where spinners can have a favorable condition. Australian team management at that time somehow did not like the idea of regularly playing two wrist spinners in the eleven.

So, it was only when Warne was injured or had a rare off match, MacGill would make the cut. He became a regular in 2003 when Warne was banned for doping. In his absence, MacGill took 53 wickets at 31.54 in 11 Tests.

He managed to grab 208 wickets in his Test career with a strike rate of 54, which was better than Warne’s. Also, MacGill had a superior average in home Tests. MacGill took 135 wickets at 27.68 against Warne’s 30.42.

After Warne’s retirement in 2007, MacGill only could play for four more Test matches in two series. He retired in 2008 aged 37.

The second man on the list had a similar fate. Patrick Patterson was often considered the quickest bowler of his generation. But, he could only occasionally make the final cut in a national side, boasting the likes of Marshall, Ambrose, Walsh, and later Bishop.

Patterson made his debut in 1986 and played his last Test match for the West Indies in 1992. In between, he played 28 Test matches and took 94 wickets. Not a glittering record comparing to the other Windies fast bowling greats, but what set him apart was his pace.

His shot to fame was his very first day at Test cricket. In a green Sabina Park wicket in 1986, he terrorized the likes of Graham Gooch, David Gower. “It was the first time,” said Gooch, “I’d ever really got the whiff of danger in the nostrils.” Patterson scalped total of seven wickets in the match and made a name for himself as the fastest and meanest bowler of his time. Unfortunately, as mentioned before the 80s was not the ideal time for Patterson, he could barely start for the dominating windies.

After playing his last Test match against Australia in 1992, Patterson sort of went off the grid and started living a recluse life at Jamaica.

Barry Richards had a different fate than MacGill and Patterson. He is often considered one of the finest batsmen of all time. Ironically he played only four Test matches in 1970 all against Australia.

Richards scored 508 runs in those four matches with an astonishing average of 72.57. As a 25-year-old batsman he caught the eye for his panache, technicality and high skill. Unfortunately, his first Test series was going to be his last hurrah at the highest level, as South Africa were banned from the international sporting arena in the same year for apartheid.

However, Richards batting prowess did quench the thirst of the purist and fans alike as he kept on playing for Natal, Hampshire and South Australia. Later in the 70s, he enthralled the world audiences with his superlative batting performances in the Kerry Packer series.

One of the biggest revolutions of the 1992 cricket world cup, besides colored kits and 15 over field restrictions was surely Mark Greatbatch. Usually a middle-order batsman of decent skill and technical ability, he changed the concept of the shorter version of the game. New Zealand’s visionary skipper Martin Crowe promoted Greatbatch up the order to open the batting. That changed everything.

In every match, Greatbatch was allowed to bat with complete freedom and score at a high rate, usually in the first 15 overs where fielding restrictions were set. He was a complete success. Though his style of batting did not please the pundits, four years later this tactic was more successful with the Sri Lankan duo Sanath Jayasuriya and Romesh Kaluwitharana.

With his ‘pinch-hitting’ style in 1992, he amassed 313 runs in seven world cup matches with a strike of 87.92, which was considered very high at that time. Just imagine playing him in the modern T20 cricket. It seemed like he was tailor-made for the modern version where it is all about taking the early initiative.

Like Greatbatch, one of his contemporary Neil Fairbrother can be considered as a misfit for his time. In an international career spanning seven years, he only played 75 matches for his national side. Those days, elites like England weren’t much into the one-day games. But, whenever they played, Fairbrother remained a staple for the team.

Sharp, skillful and street smart brand of cricket from Fairbrother was very new for the late 80s and early 90s. He well could be one of the earliest genuine finishers of the game. A tag which later used to be associated with Michael Bevan in the late 90s. Fairbrother was sort of a Bevan’s beta version. A type now one day teams all over the world values very highly.

A quintessential one day cricketer, Fairbrother scored 2092 ODI runs with an average of 39.47.