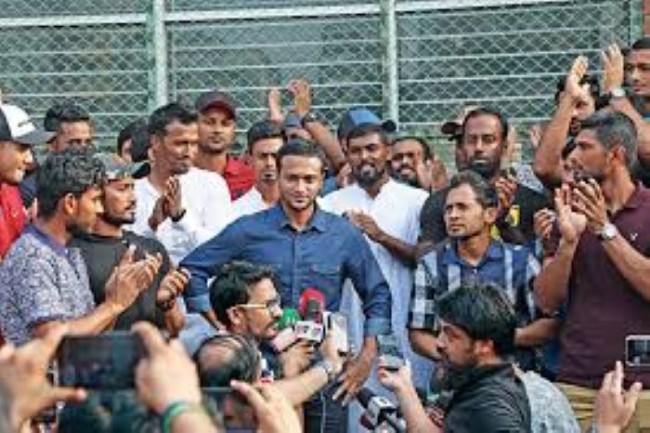 Former Bangladesh skipper Mashrafe Bin Mortaza said that he was defamed in front of junior players during the movement for an 11-point demand by the cricketers led by Shakib Al Hasan.

Mashrafe also said that he was not contacted by any player about the movement which happened in October 21, 2019, where senior cricketers likes of Shakib Al Hasan, Tamim Iqbal, Mushfiqur Rahim and Mahmudullah Riyad were accompanied by the bulk of the national players coupled with so many first-class cricketers.

Mashrafe put up the question in a Youtube live chat session while players went on for an indefinite strike to implement their demand but captain Mashrafe was not seen in the strike, which was unpleasant to see for the cricket fans.

“The situation was very difficult for me. The day they demanded 11 points, there should have been 12 points. The 12th line should have been, we did not call Mashrafe in this movement. Because I was not retired yet, I was also the captain. Naturally, people will ask where Mashrafe is,” Mashrafe Bin Mortaza said.

“I had a conversation with Tamim the very next night after the movement. I told him that you guys should have a demand of 12 points because you guys left me in an awkward situation,” Masrafe said in the live talk session.

“You guys didn’t call me which has a different view for and against. But what you left for the people, people will start questioning where Mashrafe is, for you guys I had to hear so many things,” he added.

Clearing the air, Mashrafe then told why he wasn’t able to receive the call from Tamim two days before the strike.

The 36-year-old captain also said that if the players want to avoid him, that’s fine for him but they should clear the air so that no one gets misleading information and he wouldn’t face any awkward situation.

“They also said that I was in Narail. Why dragging out, just say it clearly that you guys didn’t want me to participate in the movement. There was no need to defame me in front of junior players,” he also said.

“I didn’t have any option, which is why I went down to my official Facebook fan page and published my statement without even talking to them. I’ve supported their movement of 11-point demands. Tamim later gave a statement that he called me but didn’t get me. Firstly, I talked with Tamim three days before the movement through Whatsapp. He told me that there is a match in Chittagong, as I agreed to play the match I told Tamim to have the match fee, I will later have it from him. I was not online and my father was admitted in the hospital at that time.”

“During that time, Tamim called me on Whatsapp. I saw it and thought that he might have called me for the match fee, so I decided to talk about it later. In the meantime, this course of event happened. Tamim, called me it got clear but have I not been found in any need for Bangladesh cricket, wherever I’ve been I was found out, whether it’s in the jungle. Many players live me around my house. I’m not accusing anyone, Tamim might have the intention, but somehow they wanted to avoid me for some reason. Which is fine? Absolutely fine,” he added.

“I’ve never said that I’m captain why you guys didn’t tell me about it and will not say that ever. Even if they don’t call me in the dressing room, I’ll not go there either. But I’ve been put into an awkward situation in front of so many people because the demand is logical and as I was not there so that means I’m illogical. I was the only cricket who faced that situation. If they had cleared that they didn’t call Mashrafe in that movement or they didn’t find me, then I might have been on the safe side. But they didn’t leave that option for me,” he concluded.