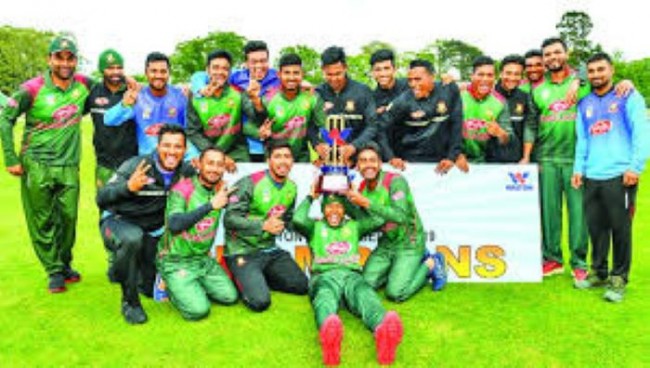 Bangladesh will be celebrating one year of their first-ever tri-nation series triumph against West Indies which they won after having gone their seven efforts in vain.

The tournament win was the perfect warm-up for the Tigers ahead of the 2019 ICC Cricket World Cup, in which pundits had touted them as the dark horse of the tournament.

There were only two victories came against West Indies and Afghanistan after the fairy tale against the Proteas. And a match was washed out against Sri Lanka as well.

Bangladesh finished ninth in the extravaganza. Everybody was disappointed at such a performance from the Tigers led by its charismatic lead Mashrafe Bin Mortaza.

Shakib showed his class and performed at its best in the global events. The ace all-rounder outshone all at the group phase. He scored 606 runs and claimed 11 wickets in World Cup 2019 in its eight appearances for the Tigers. He was in contention for player of the series award.

The performance of Tamim Iqbal and Mshrafe in the World Cup was very disappointing for the Tigers’ tent. The veteran duo had revealed in a recent live session on facebook that if they could have supported Shakib and performed 25 percent more in the tournament, Bangladesh would have played in the semifinal of the flagship tournament.

Bangladesh axed their coaching staff after the mega event. Steve Rhodes was considered to be a very good coach by the players but BCB has made a mutual divorce with this English head coach after the disappointing performance in the World Cup. BCB did not show any interest in renewing bowling coach Courtney Walsh's contract as well.

Bangladesh ODI team then went to play a bilateral series against Sri Lanka on their home yard from where best performer Shakib opted out of that series citing personal grounds.

Mashrafe  along with pacer Mohammad Saifuddin have recurred their respective injuries just few hours before the Tigers’ departure that were the big blow for the visitors.

Tamim Iqbal was named interim captain for the three-match ODI series and Bangladesh had given tooth less performance in that series. Bangladesh was whitewashed by the Lankan in the fifty over format.

Bangladesh then appointed Russell Domingo as their new coach after the Sri Lanka series and Shakib was also banned by ICC for two years with one year suspended punishment.

Bangladesh had not had any games over one-day format to play because of ICC T20 World Cup which is scheduled to play in October in Australia. Along with, they had games for the Test Championship as well.

Bangladesh then played three one day matches against their most favourites opponent Zimbabwe on their home soil and beat them convincingly as well. Liton Kumar Das and Tamim were in a marauding mood in that series.

In that series, Mashrafe  Mortaza has decided to call it days from the Bangladesh team as ODI captain .Masharfe was the most successful Bangladesh captain in its history and won exactly 50 matches as captain of the Tigers. His departure has left a big vacuum for his predecessors. Mashrafe though still has not retired from the one day team and going forward his future still remains uncertain as well.

Tamim was supposed to make his debut as one day captain in the next Ireland series but that series was postponed due to the novel COVID-19 virus contagion across the globe.

Bangladesh Cricket Board has formulated a long term goal for the 2023 World Cup which will be happening in the sub continent region. BCB is also hoping that they performed really better than the 2019 World Cup in the United Kingdom (UK).

Bangladesh Under -19 success in ICC events will add some new faces to the one day team and senior players like Tamim, Shakib, Mushfiqur Rahim and Mahmudullah Riyad will be able to guide them in that World Cup. Liton and Soumya  can also be the nucleus of the batting unit when Bangladesh will be playing their first match of the 20203 World Cup as well.