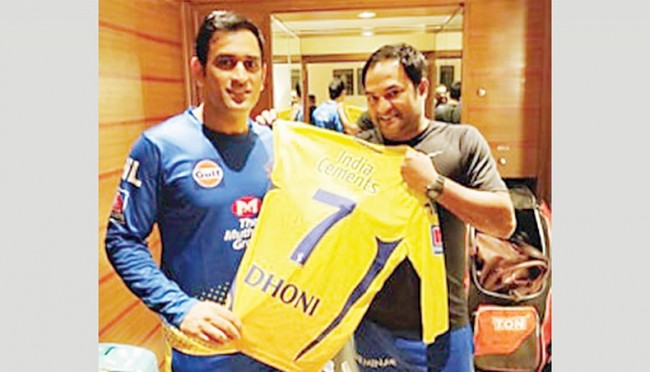 Bangladesh’s Khalil Khan said that he is now sitting idle at home just like any other star cricketers performing in the Indian Premier League as he is unable to take part in the cash-rich tournament as the masseur of Chennai Super Kings, where he is a permanent backroom staff for last three years.

‘’I used to work as a masseur in the Dhaka cricket scene. I worked with the national team, club teams, Bangladesh Premier League teams. Maybe, luck took me to Chennai. During the Asia Cup T20 2016, in Dhaka, Indian Skipper MS Dhoni was not feeling well. Their support staff could not treat him well and someone suggested my name. I put him back to working condition and after that, from there he offered me a job in Chennai Super Kings. I accepted the offer and I am working with them for three seasons,’’ Khalil was quoted in New Age on Friday.

Khalil, who was brought into this line of work by a Sri Lankan cricketer T L Fernando during his stint in the Dhaka Premier League, previously used to do massage for sportspersons in a conventional way but after getting the call up from Chennai Super Kings, they facilitated him to do a massage therapy course from Apollo Hospital Chennai.

Khalil enjoys all the facilities which are provided for the players of the most successful IPL team as important backroom stuff.

‘’The players’ payments might be high, but as a team member, all the facilities are equal. Taking about food, hotel, travel arrangements, allowances; everything,’’ said Khalil.

‘’The biggest part of my income comes from IPL. Well, a player makes millions from IPL, being in a smaller role we also made some fortune. But at this situation, things look uncertain and it’s going to cost me,’’ he said adding that he refused an offer t work for a team in the Canadian Global T20 tournament team on the basis of the promise made by CSK authority and even he did not work during the last edition of BPL also

‘’I thought, I am getting handsome money from IPL, let someone else make some from BPL. But now it’s getting difficult for me,’’ Khalil.