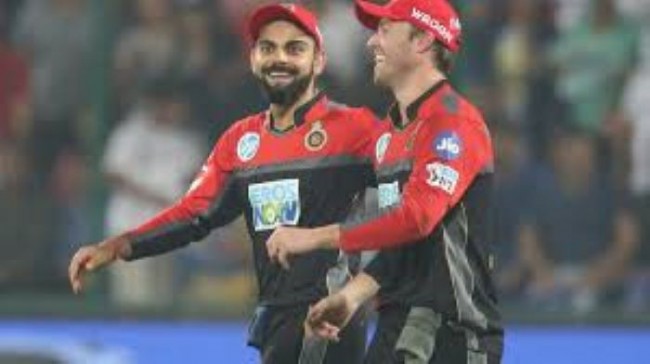 AB de Villiers on Friday revealed he will auction his Royal Challengers Bangalore jersey along with Virat Kohli's kits from an Indian Premier League (IPL) match in 2016 to help raise funds for the Covid-19 relief.

The proceeds from the auction will help 'put food on the plates of the needy' during the Covid-19 pandemic, de Villiers said.

AB de Villiers, during an Instagram chat with his RCB teammate, said he had asked Virat Kohli to get hold of the bat that he used during the 'Green' match in IPL 2016 against Gujarat Lions. De Villiers said he will auction his shirt signed by Kohli, his bat and Kohli's bat and gloves. Reports PTI

Wearing green jerseys at the M Chinnaswamy Stadium, Virat Kohli and Ab de Villiers smashed hundreds reach as RCB posted 248 on the board against Gujarat Lions in the said match in IPL 2016.

"We have had a few good knocks together, I will never forget that. There is one particular knock I can remember, the one against Gujarat Lions in 2016," AB de Villiers told Virat Kohlki.

"The partnership was an enjoyable one. If I can remember correctly, I got 120-odd and you also got yhour hundred right at the end where I gave you the strike. That doesn't happen every day where 2 batsmen get hundreds in the same game. That was also the green game where we did our part to raise awareness about the environment.

"Then I was thinking we could make a difference. That's why I told you to get hold of that bat. I know you keep your bats, I also do that.

"From that particular match, I have the green shirt as well. I remember I got you to sign the shirt, I have also signed the shirt. I have got the shirt and my bat and I am going to get hold of your bat and the gloves. I know it's a big package.

"The plan is to get on an online auction platform. I know there are a lot of collectors around the world that wouldn't mind your bat, I will throw it mine as well,’’ said Villiers.

"That's amazing the fact that you also share a part of it for India. Quite an amazing gesture. I got the stuff that you asked from me," Kohli responded.

The Covid-19 pandemic has brought normal lives to a grinding halt. Both Kohli and de Villiers acknowledged that the pandemic has been harsh on the underprivileged across the globe