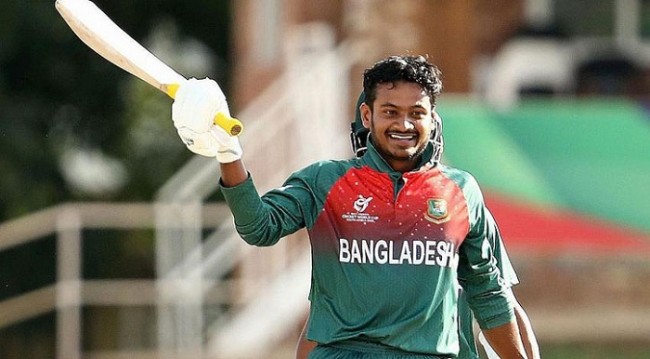 Bangladesh Under-19 World Cup-winning top-order batsman Mahmudul Hasan Joy said that he is proud for his century against New Zealand in the semifinal of the biggest global age-level tournament in South Africa.

Joy has become the first Bangladeshi batsman to score a World Cup hundred in a semifinal of an ICC event.

‘’I cannot express my feeling into words. When I think about the century I sometimes feel proud. In World Cup semifinal no other Bangladeshi batsman has scored a century as well. First of all, I feel proud of that achievement,’’ said Joy adding that he was aware that some pressure would be there in the semi-final and he was focusing on more on partnership at that time.

‘’There will be some pressure on World cup semifinal matches, I did not feel that pressure because after losing two-wicket I was focusing on building up small partnership. It was a low scoring match and we knew a 70-80 runs partnership will help us win the game,’’ he said.

Joy also suggested they need to play more on bouncy wickets in their home condition as it will help them to play well in foreign condition.

Joy hopes that Under-19 World Cup success has to be credited to the tours they have done before the World Cup.

‘’We have played a lot of series as under -19 team. We have toured in England & New Zealand. In the future, if we have more tours like this than we can move forward with our cricket. This tour was more important to us, the wickets in sub-continent condition is very different from England & South Africa's wicket. We can improve our game drastically if we can play on those countries,’’ concluded the young Tiger.