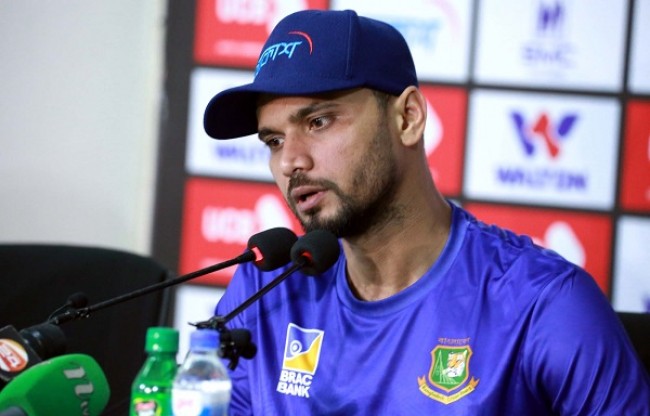 Bangladesh skipper Mashrafee bin Mortaza said on Saturday that they are not taking anything for granted against Zimbabwe as they will be battling against the pressure of expectation.

Bangladesh never lost any ODI match to Zimbabwe since 2013. In this period, they played 13 matches against them and won all of the matches.

Mashrafee warned his teammates that his team mates should guard against complacency as the Zimbabweans are better in the shorter format.

“If we win against Zimbabwe, it won’t be discussed because it is expected but if we lose any match against them, we’ll be more criticized, so we have to be careful in every step,” Mashrafee told reporters ahead of the three-match series opener at Sylhet on Saturday.

‘’When we play against top class teams, against one, two or three, they also feel the pressure. It happens. Media, spectator, expectation- whenever you take on the national team jersey, there is some pressure,’’ he said.

Though Bangladesh inflicted whitewash on the Southern African opponents for the last three series including a five-match series in 2014, Mashrafee said that they were give some hard time by Zimbabweans in the recent past.

“Yes we have won consistently against them but if you notice, you will see some of the matches were very close. And they could have won it. So when they are close, it means they are able to beat us in this format,” he said.

“In International cricket, no opponents are easier. I believe Zimbabwe has the ability to beat us, so we should be very careful,’’ he added.

Mashrafe insisted that host should take it match by match rather thinking of whitewash right at the moment and added that now they are looking forward to start the series on the right note.

“We have to come up with all guns blazing right from the start. The start is in fact very important. We will obviously go match by match. We want to win the first match first and then we’ll think about the second and then if we can win that too, we will obviously go for sweeping the series. Right at this moment, it is absolutely not correct to say that we’ll whitewash them. They are also here to beat us,” he remarked.

Mashrafee said that there will be some sort of discomfort as it will be their first ODI series since July 2019 but insisted once they would start well, they will be back to their groove.

“There will be some sign of discomfort as we will play this format after so long time. But we can overcome it by starting well. Whatever we do-be it batting or bowling, we have to make a good beginning. If the beginning is good, the discomfort will be quelled,” he said adding that they are not ready to give their opponent an inch as it can back fire.

‘’We can lose to them. Its not like we never lost to them. We won many matches in last overs among our wins. So that means they can defeat us. So we have to ensure,’’ he said.