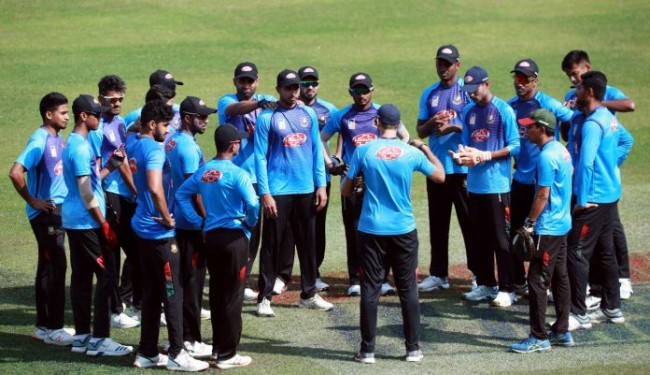 Beaten and bruised Bangladesh is eying to avoid the humiliating whitewash as they would face off Pakistan in the third and final T20 Internationals on Monday at the Gaddafi Stadium in Lahore.

The Tigers had already conceded the three-match series following their five-wicket and nine-wicket defeat in the first and second match after putting up a mediocre batting show.

Though the visitor put a tough fight in the first match thanks to the bowlers, the second one was a one-way traffic as Babar Azam and Mohammad Hafeez made a mockery with Bangladesh’s bowling to show the difference between the two sides.

Bangladesh’s meek surrender was particularly disappointing given the fact that they had come here after playing so many T20 matches in the Bangabandhu Bangladesh Premier League (BBPL) and also all of the batsmen and bowlers were in superb form.

But their performance in the both matches proved they are yet to decode the playing style of T20 cricket.

In both matches, Bangladesh however got a wicket in which they are used to play back in the country. But they again proved their shortcomings to use the first and last power-play well in batting—in which the success of T20 cricket generally lies.

In the first match, they made just 35 runs in six overs without losing any wicket while in the second match, which was a fine track for batting, they could make just 33-2.

Tamim Iqbal and his fellow opener Naim Sheikh’s failure to give a proper start in the first power-play basically routed Bangladesh’s way to make a healthy total at the end. In the first match, they were restricted to 141-5 while in the second match they put up just 136-6.

Tamim Iqbal though scored 39 and 65 in those two matches, his runs came at slower pace that sparked huge criticism.

The seasoned campaigner’s tendency of not taking risk despite being set in the crease was a reason that the cricket fraternity found a way to criticize him more.

Tamim failed to make up his slower start at the end as he was trapped run-out in both matches by running between the wickets casually.

However still he is the only batsman who was consistent in those two matches, while the other batsmen couldn’t translate their BBPL form here.

Leaving aside those factors behind them, Bangladesh still hopes for the best as they want to end the first phase of Pakistan tour with winning note.

“It’s now the time to rectify our mistakes and end the tour with good note,” pacer Shafiul Islam said on Sunday while talking to the journalists in Lahore.

“Pakistan played better cricket than us, while we did some mistakes on the field. In the first match, we made it tougher for them but in the second match Babar Azam and Hafeez played really well to take the game away from us. Hopefully we will come up with better cricket tomorrow and win the game,” he concluded.

Bangladesh and Pakistan so far played 12 games in this format, of which Pakistan won 10. The Tigers won just two and the final T20 gives them an opportunity to increase the number.