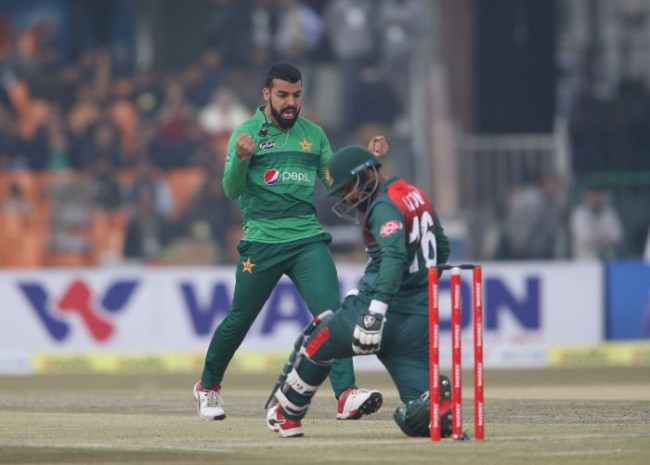 A yet another dismal performance saw Bangladesh concede the three-match T20 series against Pakistan when they suffered a humiliating nine-wicket defeat in the second match at the Gaddafi Stadium in Lahore on Saturday.

The third match which is on Sunday now turns out to be a mere dead-rubber.

Despite a 53 ball-65 from opener Tamim Iqbal, Bangladesh could compile just 136-6, a score that Pakistan easily overhauled, making 137-1 in 16.4 overs, thanks to half-century from captain Babar Azam and Mohammad Hafeez.

Babar and Hafeez combined for a 131-run for the undefeated second wickets stand to hasten the victory. Hafeez was not out on 67 off 49 with nine fours and one six while Babar smashed an unbeaten 44 ball-66, hitting seven fours and one six.

In what turned out to be Bangladesh’s must-win game in three-match series, the Tigers yet again won the toss and opted to bat first but the middle order failed to show any unwavering resolve in batting.

Tamim held together the innings and clobbered seven fours and one six in his knock before being run-out in the 18th over.  Afif Hossain made 21 off 20 while captain Mahmudullah Riyad scored 12.

Tamim’s fellow opener Naim Sheikh got a first ball-duck in the second over after he edged one to wicket-keeper Mohammad Rizwan in the bowling of Shaheen Shah Afridi.

Tamim and Afif added 45-run for the fourth wicket stand before Mohammad Hasnain got the better of Afif.

Tamim however then reached his seventh half-century but when it was the time to compensate his slower knock, he was trapped run-out.

Shafiul Islam dismissed opener Ahsan Ali in the second over but Pakistan regrouped nicely thanks to Babar and Hafeez who batted with steely resolve to make the match a one-way traffic.

They were initially watchful and scored just 35 runs in the first power-play, just two runs more than what Bangladesh made. But unlike the Tigers, Pakistani duo made up the slow start once they got themselves set in the crease.

While Babar Azam who got dismissed for a duck in the first match played with attacking mindset, Hafeez struggled a bit and at one phase, his score was 17 off 29.

But Hafeez was the first to reach the half-century, his 11th half-century off just 39 balls. Babar then brought up his 13th half-century, steering Mustafizur to third man region for a single before he pulled him for a six.

With the duo competing to surpass each other, Bangladesh found them in vulnerable state and finally bowed down without any resistance.