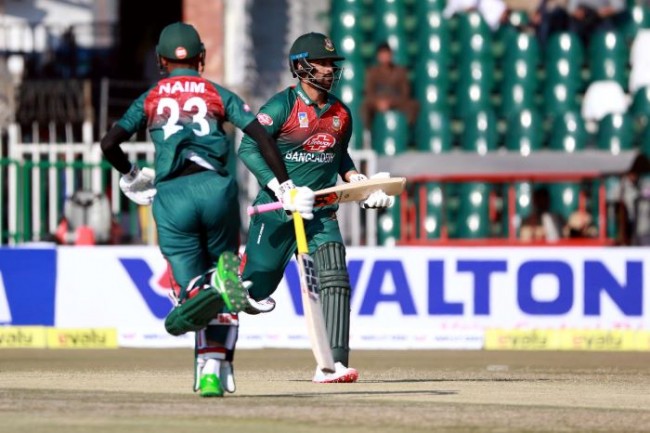 An out-of-sort and jaded batting led Bangladesh’s five-wicket defeat to Pakistan in the first T20 match at the Gaddafi Stadium in Lahore on Friday.

After opting to bat first, Bangladesh put up 141-5, a score that looked never enough to resist Pakistan even though the pitch was on bit slower side.

Pakistan faced a hiccup initially before Shoaib Malik came up with all of his experiences to make it Pakistan’s day as the hosts reached the target with three balls to spare.

Malik hit an unbeaten 58 to help Pakistan take a 1-0 lead in the three-match series.

Opener Naim Sheikh was the highest scorer for Bangladesh with 43 while his senior opener Tamim Iqbal made 39.

The duo however added 71 runs for the opening stand but that came at such slower pace that it created an adverse impact on the middle order.

None of them could take any initiative to go after the Pakistan bowlers even in the first powerplay. Lack of their anticipation and over cautious batting led Bangladesh to score just 35 runs in first six overs.

The openers then tried to accelerate the innings but simply couldn’t execute their plan well.

However the run-out dismissal of Tamim Iqbal brought an end to the 71-run partnership that came off 11 overs. Tamim played 34 balls to score 39, including four fours and one six.

The pressure to score swiftly with too many wickets at hands got the better of both Naim and Liton who came to bat at No.3 position.

While Liton was trapped run-out like Tamim after scoring 12, Naim holed out one, trying for a big shot. Naim struck three fours and two sixes in his 43 off 41.

However captain Mahmudullah was not out on 19 of 14 with two fours and the knock enabled Bangladesh past 140, which looked meager, considering the nature of the wicket.

Pakistan might seal the deal in the last over but never it looked the target was beyond their reach.

Seasoned campaigner Shoaib Malik, who was in superb form in the recently concluded Bangabandhu Bangladesh Premier League (BBPL), led Pakistan’s victory with 58 not out off 45, hitting five fours.

Opener Ahsan Ali who made his T20 debut scored 36 off 32 with four fours.

The fall of early wicket slowed them down but veteran Mohammad Hafeez who was recalled after long days, tried to pace the innings.

Mustafizur Rahman cut short his stay in the crease, dismissing him for 17.

Shoaib Malik then showed the value of experience and the form as he held together the innings, quelling any hope of Bangladesh’s comeback in the match.

Firstly he shared 46-run with Ahsan to steady the ship before guiding the lower middle order astutely to sail the side home.