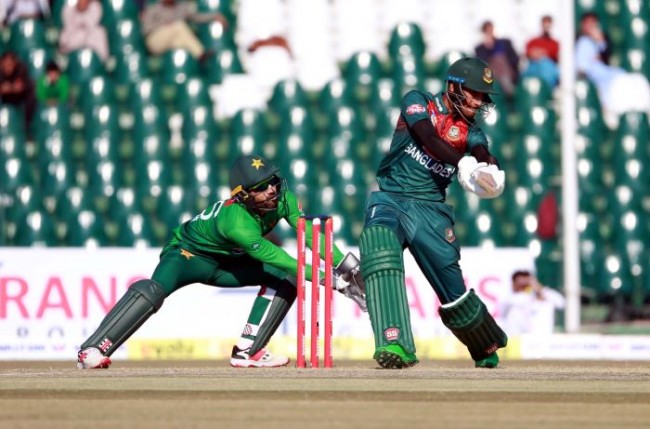 The openers slow batting cost Bangladesh dearly as they put up a meager 141-5 in the first T20 International against Pakistan at Gaddafi Stadium in Lahore on Friday.

Opener Naim Sheikh was the highest scorer with 43 while his senior opener Tamim Iqbal made 39.

The duo however added 71 runs for the opening stand after captain Mahmudullah Riyad chose to bat first.

The openers might post a big partnership but the runs came at such slower pace that it created an adverse impact on the middle order.

Tamim and Naim made those 71 runs in 11 overs after scoring just 35 runs in the first powerplay.

However the partnership was broken after Tamim was trapped run-out. He scored his 39 off 34 balls, hitting four fours and one six.

The pressure to score swiftly with too many wickets at hands got the better of both Naim and Liton who came to bat at No.3 position.

While Liton was trapped run-out like Tamim after scoring 12, Naim holed out one, trying for a big shot. Naim struck three fours and two sixes in his 43 off 41.

However captain Mahmudullah was not out on 19 of 14 with two fours and the knock enabled Bangladesh past 140, which looked meager, considering the nature of the wicket.