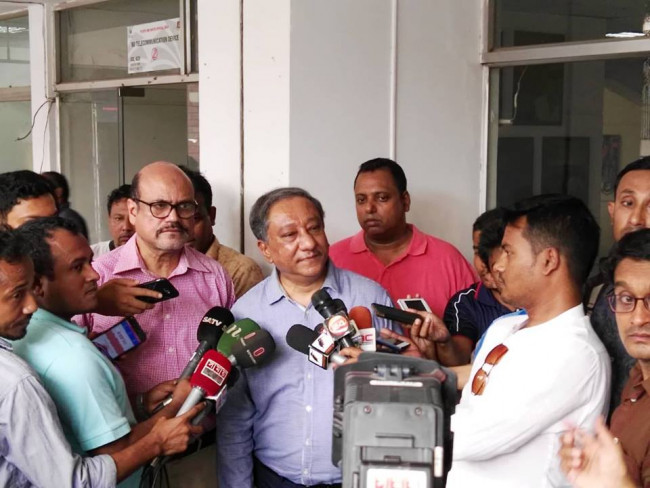 It was tough for Bangladesh to say to ‘no’ to tour in Pakistan since International Cricket Council (ICC) involved here, said BCB president Nazmul Hassan Papon.

The two-match Test series that Bangladesh would play is the part of World Test Championship (WTC) game, organized by ICC, which is like Test World Cup.

“If it is just bilateral series, then the situation would have been different but the two-match Test series is the part of World Test Championship, which is being organized by ICC. It is kind of World Cup. The championship game is being play by home and away basis, so there is no option [to avoid it],” Nazmul told the reporter on Sunday.

“I think we should take part here as a full member of ICC. And ICC also wants that. This was the main pressure actually.”

The BCB chief said they would understand the whole situation of Pakistan once they would play the three-match T20 International series for which Bangladesh is leaving the country on January 22. The three T20Is are scheduled to be held on January 24, 25 and 27 and all the matches will be held in Lahore.

“I think we will understand the whole scenario once we’ll go there for T20 series. If the problem arises during the tour then we can discuss about it and can take the next course of action,” he pointed out.

After the T20 series, Bangladesh would visit Pakistan for two more times—firstly for first Test and secondly for an ODI and the second Test.

The BCB president further said if any unwanted situation happens there, they would change their decision.

“ICC would send their team and they have already observed the security condition in Pakistan. Meantime, International team started visiting there. Even Sri Lanka played Test series. ICC is sending their team, and so considering all those factors, it was tough to say ‘no’ to the tour. Despite all these, if any unwanted situation happens, then we won’t go there. If we think the situation is different than what we thought earlier, we’ll immediately cancel the tour.”

Nazmul Hassan Papon added that the players should concentrate on just cricket, leaving aside the security issue, which he said the BCB would deal with.

“It is tough to play cricket without mental peace. And yes we have sent an advance security team. The personnel from the NSI, DGFI will be there to observe the whole situation. For our part, we have taken full preparation. Now we just want the players to play with uncluttered mind.”

Papon said that he would present in Pakistan to give the players mental strength there. Along with him, the chief selector Minhajul Abdein Nannu, Cricket Operations chairman Akram Khan would be there with the team. Sabbir Khan will be there as the operations manager of the team.