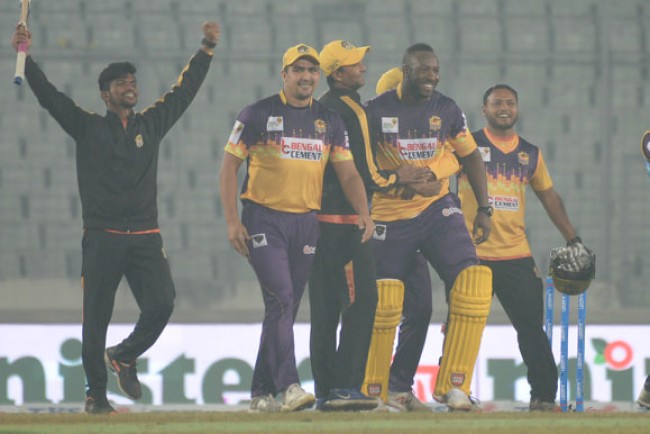 Rajshahi Royals West Indian all-rounder Andre Russell said on Wednesday that he is not in a hurry to party now as he wants to celebrate after clinching the Bangabandhu Bangladesh Premier League.

Gayle flourished with full glory after three poor innings and steered the side to 164-9 amid the downfall of his colleagues at Sher-e-Bangla National Cricket Stadium on Wednesday.

It though not looked daunting, Rajshahi Royals batsmen dug their own graveyards to take the side closer to defeat.

But captain Russell came up all guns blazing to rescue the side from the hopeless situation as Rajshahi reached the winning target with four balls to spare.

Rajshahi will take on Khulna Tigers in the final on Friday, which will also be their chance to take the revenge of their defeat in the first Qualifier.

‘’I wish there was that club to celebrate but I am in no hurry because we have an important game in two days time and I will celebrate the party after that game,’’ Russell told reporters after the match who added that he get all the energy of hitting those big sixes just by having fruits and coconut water.