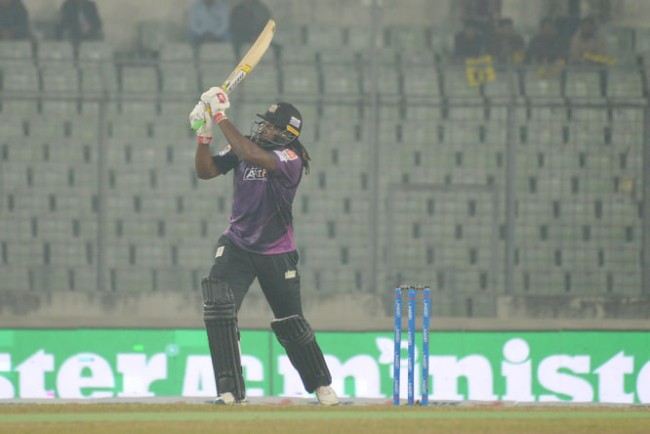 Despite a typical aggressive knock from Caribbean stalwart Chris Gayle, Chattogram Challengers was held back to a mediocre 164-9 against Rajshahi Royals in the second Qualifier game of the Bangabandhu Bangladesh Premier League (BBPL) at Sher-e-Bangla National Cricket Stadium on Wednesday.

The winner of the game would seal the final of BBPL. But in what turned out to be a virtual semifinal, Chattogram couldn’t make their total daunting despite a marauding 24 ball-60 from Chris Gayle.

After being sent to bat first, Chattogram made a whirlwind start, thanks to Gayle, who after three poor innings by his standard in the last three matches, flourished with full glory.

Popularly dubbed as ‘Universal Boss’, Gayle made his intention clear from the first ball and brought up his half-century off just 21 deliveries amid the wickets tumbling around him.

Asela Gunaratne then hit 31 off 25 with one four and two sixes to help Chattogram make their total some sort of decent.