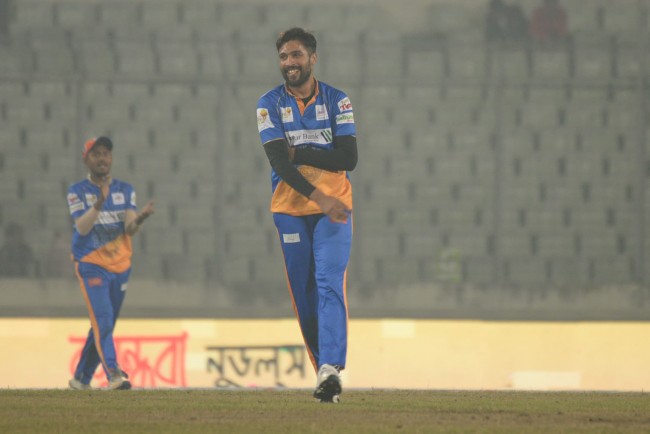 Khulna Tigers Pakistani pace bowler Mohammad Amir said that he is not ready to compare his performance with the one that he displayed against India in the Champions Trophy final that helped the clinch the trophy as well as beat their arch-rival for the first time in an ICC event.

Amir came up with an intriguing display of fast bowling to script a new BPL bowling record and in doing so propelled Khulna Tigers to the final of the Bangabandhu Bangladesh Premier League (BBPL) at first attempt.

‘’Champion Trophy spell was bit special for me as it was a historic game for me because we beat India for the first time in any ICC trophy,’’ said Amir.

‘’This one is also special because this is my career-best figure but you cannot compare them because that was 50-over game and this is a 20- over game,’’ he said.

‘’That was international game and this is league game but emotions are always same .i want to give 100 percent whether I am playing an international game or league game. I think both are same,’’ he said adding that he feels luck plays a big part behind performing in this manner.
‘’I always believe in luck because sometimes you bowl well and don’t get wickets and sometimes you get a wicket in full toss or wide balls,’’ he said.

Amir added that bowling only three overs in the opening spell was a team plan as they knew Shoaib Malik can be dangerous in the end.

‘’I think we have bowled well and you have to give credit to other bowlers at the end because condition was not easy as there was lot of dew and credit goes to fielders as well,’’ he said.

‘’They took all the catches apart from one and as a team, it was a complete team performance,’’ he added.