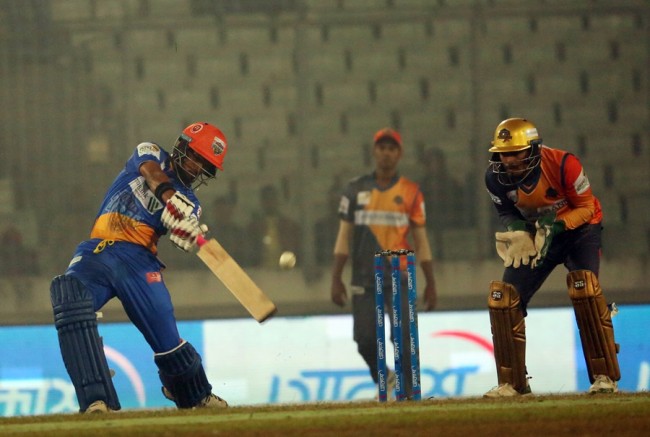 Shanto who brought up the century off just 51 balls during his epic knock, enabled Khulna to gun down Dhaka’s staggering 205-4 with utmost ease to set a record of the highest successful chase in BPL history.

Shanto befittingly sealed the deal with a crisp cover-drive boundary to help Khulna reach winning mark with 207-2 with 11 balls to spare and eclipsed Sylhet Royals’ 198 against Rangpur Riders in 2013 to set a new record.

Shanto is the fifth Bangladeshi batsman to hit a BPL century after Shahriar Nafees, Mohammad Ashraful, Sabbir Rahman, and Tamim Iqbal and the third centurion in this season after Andre Fletcher and Dawid Malan.

Having achieved the unlikely victory, Khulna topped the point table and set a clash against Rajshahi Royals in the first Qualifier on Monday. Dhaka Platoon demoted to the fourth position and would play Eliminator game against Chattogram Challengers on the same day.

Khulna made the intentions clear right from the start of the chase but the anchor was Mehidy Hasan Miraz, who cut through Dhaka bowling in disdain to hit 25 ball-45 with seven fours and one six.

Along with Shanto who smote eight fours and seven sixes in his delightful knock, Miraz added 70 in just 6.5 overs to give the side a flying start before being dismissed by Mahedi Hasan.

Shanto then unleashed some powerful strokes from his repertoire to torment the Dhaka bowlers and kept the rhythm, leaving Rilee Rossouw, a master of T20 cricket, a mere spectator.

Shanto who scored first 15 runs off 13 balls, brought up his half-century in just 27 balls, before increasing his tempo to an uncanny degree.

Rossouw meanwhile played one shot too many to be dismissed by Shadab.

With Rossouw, Shanto shared 81 off just 40, in which the former contributed 23 off 17 with two sixes.

To his delight, his captain Mushfiqur Rahim, who missed out a ton just 24 hours ago at the same venue, played a perfect foil and accompanied him in achieving an astounding victory, remaining not out on 18 off 10.

Earlier, Mominul Haque and Mahedi Hasan demonstrated a powerful batting show to steer Dhaka to a total that looked imposing.

With Mahedi firstly tormenting the bowlers to score runs rapidly, Mominul grew with the strength to strength and at one phase, in a blink of eye outscored Mahedi to score his second half-century in the tournament.

He continued in the same vein and approached his first T20 century before Amir finally got the better of him.

Mahedi however then came out from the shell to help Dhaka propel past 200 runs mark. They looked sure for a victory, knowing Khulna needed to produce a record chase to win but hardly they knew, they would be undone by a batsman who hasn’t had any T20 credential before this glitzy knock.