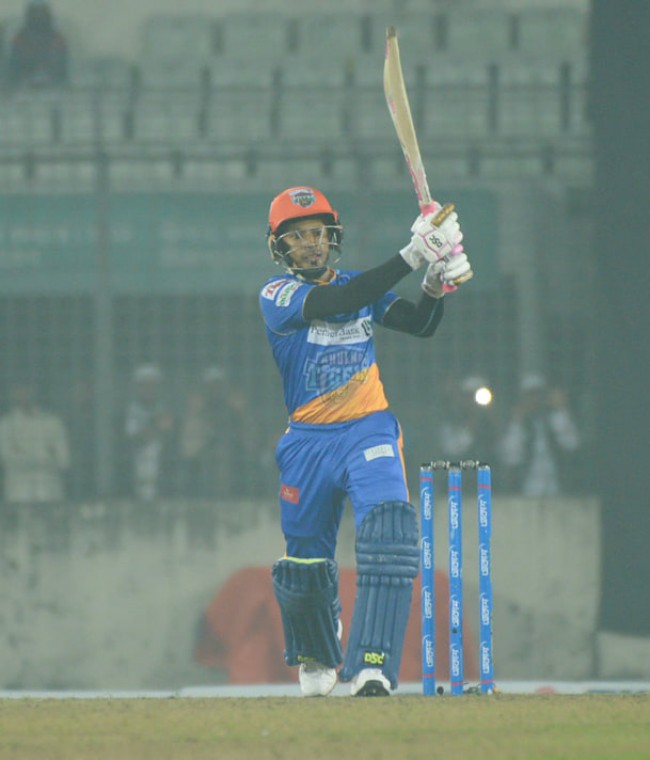 Mushfiqur Rahim blasted a 57 ball-98 not out in a show of gutsy batting as Khulna Tigers clinched a whopping 92-run win over Cumilla Warriors and in doing so sealed a place in the play-off in Bangabandhu Bangladesh Premier League (BBPL) at Sher-e-Bangla National Cricket Stadium on  Friday.

Khulna indeed joined Chattogram Challengers, Rajshahi Royals and Dhaka Platoon in top four but the victory pushed them to the second spots with 14 points from 11 games, same as Rajshahi and Dhaka. However Khulna edged both of them by net-run-rate.

Cumilla who could have stayed alive in case of a victory is now eliminated from the race completely and finished as fifth team with 10 points from 12 games.

Captain Mushfiqur’s  98 not out, his second 90 plus knock in the tournament helped Khulna rack up a mammoth 218-2, a total that was too hot to handle for Cumilla who eventually could put up only 126-9.

Mushfiqur earlier was dismissed on 96, that came as winning-cause during the chaseagainst Chattogram Challengers in second match but this time he was really close to hit his first T20 century.

The prospect looked bright further when he reached 96, hitting a boundary in the second ball of the last over, delivered by Soumya but thereafter he could take just two singles to be stranded on 98, his highest T20 score.

He looked seriously dejected by missing the century but Khulna got a total that kept them in a position of winning even before Cumilla started chasing it.

Cumilla got an expected start after sending Khulna to bat first as their new ball bowler Irfan Hossain removed Nazmul Hossain Shanto (1) via leg-before in the first over.

Rilee Rossouw though started with bang, hitting three sixes in his 11 ball-24, Mujeeb Ur Rahman got the better of him in his first over, reducing Khulna to 33-2 in fourth over.

Mushfiqur and Mehidy Hasan Miraz, who also continued his rich vein of form as an opener, shared a record 168-run for the third wicket to leave Cumilla in a disarray state.

The partnership is broken only when Miraz sustained a hamstring injury and got retired hurt with 45 ball-74, a knock, his second fifty-plus innings, studded with five fours and three sixes.

Mushfiqur Rahim played 57 balls to hit 98 which was designed with a dozen of boundaries and three sixes. This was Mushfiqur’s fourth fifty plus knock in the tournament. Najibullah Zadran was not out on 7.

With a huge total to chase, Cumilla’s start was horrendous as Mohammad Amir rattled the stump of Sabbir Rahman to give him first ball-duck.

But Shahidul Islam gave them mighty blow with double strike that included the wicket of captain Dawid Malan (8) who was the most inform batsman before the pacer removed Stiaan Van Zyl for 10.

Upul Tharanga with 23 ball-32 kept the innings flowing before he was undone by the spin of occasional bowler Shamsur Rahman to leave Cumilla at precarious 60-4 in ninth over.

With a victory looking unlikely, from then on, it was Cumilla’s journey to reduce the margin as best as they can to.

However they continued to be plunging to low as the likes of Soumya Sarkar (10), Yasir Ali (20) couldn’t make the start count and thereby the big defeat was ensured.

Shahidul Islam was the most successful bowler for Khulna with 3-27 while Mohammad Amir and Aminul Islam Biplob snapped up two wickets apiece.