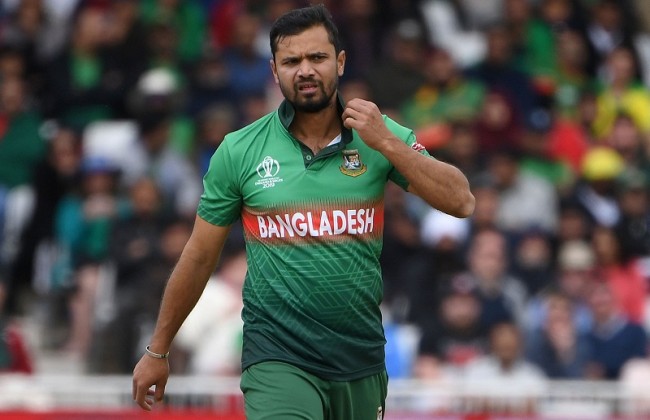 Mashrafe Bin Mortaza has come to bat for Pakistan tour, saying that he personally would love to go to Pakistan for a cricket tour if he is available for selection in Test and T20 team.

Mashrafe is not playing any format of those two after retiring from the T20 cricket in 2017 while keeping him away from Test cricket since 2009 and hence there is no chance he could be included in the squad.

Only format currently he is playing is the ODI cricket in which he led the side in the World Cup last year before pulling out him from the three-match ODI series in Sri Lanka due to injury.

“If you want to know really [about my opinion], I would say, I would have gone to Pakistan,” Mashrafe said on Friday when his attention was drawn to ongoing Pakistan tour debate.

“I definitely would have talked to my family. I don’t know whether they [family] would have allowed me. Because this is the first time we are talking about this. But if you just asked me to go to Pakistan, I would have gone even though everything would have depended on the decision of my family.”

The Pakistan Cricket Board (CCB) has recently proposed Bangladesh to play the two-match Test series first before taking part in the three-match T20 series latter in convenient time.

The proposal came in the wake of the Bangladesh Cricket Board’s (BCB) decision to play the T20 series first as they want to visit Pakistan for a short time only at this moment.

Sri Lanka was the first team to go to Pakistan for a Test series since the attack on them in Lahore in 2009.

BCB president Nazmul Hassan Papon said most of the players are reluctant to tour Pakistan for a longer period at this moment.

He also added that while the other players including the head coach Russell Domingo showed their intention to go to Pakistan for a short-visit, Mushfiqur Rahim is the only one who refused to be the part of Bangladesh team in any kind of tour in Pakistan.

“I would have gone but that doesn’t mean who doesn’t want to go to Pakistan, they are wrong,” Mashrafe said.

“Definitely life is larger than the cricket. Personal life should always get the priority. So everyone is right on what decision they would take about this tour.”

However BCB president was supposed to give a decision on Pakistan tour on Thursday. But the decision is yet to come.