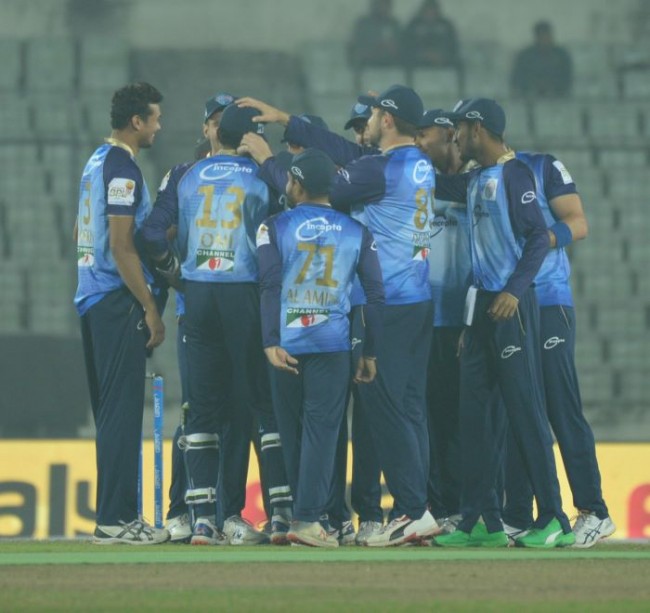 Rangpur Rangers kept them in favourable position to stay alive in the play-off race of the Bangabandhu Bangladesh Premier League (BBPL), restricting Dhaka Platoon to paltry 145-9 in their 11 h game at the Sher-e-Bangla National Cricket Stadium on Wednesday.

Fast bowlers Taskin Ahmed (3-32) and Mustafizur Rahman (3-34) were the key in holding back Dhaka to a small total and gave the side a chance to gun down it quickly to improve the run rate also.

Opener Tamim Iqbal was the highest scorer for Dhaka with 38 ball-40, sending the ball across the rope for five time. Shadab Khan paced the innings towards the end with an unbeaten 31 off 19 with one four and three sixes.

No batsman of Dhaka from the middle order stood tall in the face of some disciplined bowling attack of Rangpur.

Mohammad Nabi, who scalped 2-21 in four overs stifled Dhaka half-way through the innings and Taskin then broke the spine, removing Tamim Iqbal and Asif Ali (9) in same over.

Mustafizur Rahman took the crucial scalp of Thisara Perera (19) who looked threatening in his brief stay in the crease.

Mustaifuzr however produced his stock weapons cutter and slower to good effect to clean up the tail also.

Rangpur has now 8 points in 10 games while Dhaka has 12 points in nine matches. Dhaka could seal the play-off spot should they win the match while Rangpur would be eliminated straightway.